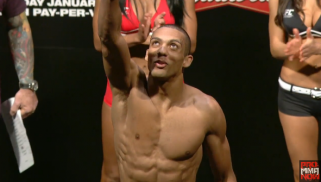 A new bout has been added to the UFC on FX 7 card as Edson Barboza (10-1) now faces Lucas Martins (11-0) in a lightweight matchup. Barboza was originally scheduled to face Justin Salas (10-4), but Salas was forced to withdraw from the event following an injury suffered during training.

UFC on FX 7 takes place at Ginasio do Ibirapuera, in San Paulo, Brazil, on Jan. 19. The event will feature a headline bout between Vitor Belfort and Michael Bisping. The main card airs on FX with the prelims expected to air on Facebook and Fuel TV.

Edson Barboza last fought at UFC 146 in May, where he dropped a first round TKO loss against Jamie Varner. Prior to that he had been on a ten-fight winning streak, defeating notable fighters such as Anthony Njokuani, Ross Pearson and Terry all in the UFC. Edson will no doubt look to get himself back into the win column with a good performance against Martins.

Undefeated newcomer Lucas Martins is currently riding an eleven-fight winning streak, most recently defeating Oberdan Vieira Tenorio via second round KO at “Jungle Fight 46” in December 2012. Prior to that he scored a first round submission victory over Thiago Sampaio at “MMA Rocks” in earlier in December, and a first round TKO win over Carlos Eugenio at WFC 1 in November. Martins now has the chance to make a name for himself with a big win over Barboza.

Stay close to ProMMANow (www.prommanow.com) for all the latest UFC news.

1 thought on “UFC on FX 7: Lucas Martins steps up to replace Justin Salas against Edson Barboza”