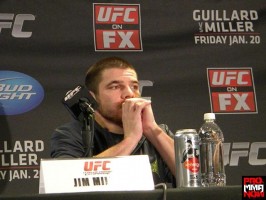 The UFC 155 PPV got off to a slow start but it ended with two very exciting fights in the co-main event and main event. There were four fighters that went home with bonus money on Saturday night. Jim Miller, Joe Lauzon, John Morago, and Todd Duffee took home $65,000.

John Moraga took home the “Submission of the Night” honors after submitting Chris Cariaso with a guillotine choke in the third round of their fight. The fight took place on the preliminary portion of the card and was the only submission win on the card.

Todd Duffee took home the “Knockout of the Night” honor with his first round finish over Philip de Fries. Duffee survived a takedown and some big shots from de Fries to get up and land some dirty boxing with uppercuts to put de Fries away near the two minute mark.

Jim Miller and Joe Lauzon took home “Fight of the Night” honors with an incredible fight in the co-main event. Miller took it to Lauzon early and was close to stopping Lauzon in the first round, however, Lauzon showed tremendous heart and made it a close fight and nearly submitted Miller in the third round. It certainly is a candidate for “Fight of the Year” in 2012.