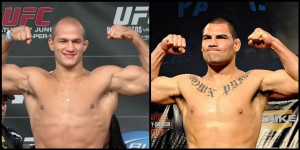 The UFC 155 heavyweight main event went all five rounds, and Cain Velasquez fought a perfect fight to avenge his lone loss in recapturing the UFC heavyweight title from Junior dos Santos who smoked him just over a year ago to take it from him.

Velasquez took the fight to dos Santos from the get go and pressured him with striking and takedown attempts. He didn’t have much success with his takedowns early, but it forced dos Santos to defend them which began to pay off in the very first round. It didn’t hurt that he was able to land a crushing right hand that dos Santos seemingly was never able to recover from as Velasquez continued the assault.

The second round was more of the same, but Velasquez was able to finally get dos Santos down and keep him down to do damage on the ground. It was remarkable that dos Santos was able to endure the pace and punishment that Velasquez dished out and manage to go the distance. It was revealed that Junior dos Santos suffered a broken jaw in the second round as well. Which was probably a result of another crushing right hand that Velasquez was able to land on the former champion. The biggest difference in the fight was the pace that Velasquez set earlier on. It wasn’t his wrestling or striking, but moreso his relentlessness in pressuring dos Santos every second of the fight and not allowing to get off with his vaunted striking.

This fight stylistically is like Chuck Liddell/Tito Ortiz. Velasquez is going to have to fight a perfect fight for at least three rounds, hope JDS tires, and avoid getting clipped during the fight which=very small %.

Well, Velasquez did exactly that and proved a lot of people wrong including myself. Could he implement that same gameplan and get the same results? I’m not sure, but he did it when it counted and now the UFC heavyweight division will take another direction as the title changes hands again. Was the ACL injury in the first fight between these two THAT big of a factor? I don’t think so, I just think dos Santos landed a huge right hand that put Velasquez away. Could that happen in the third fight? Absolutely. The fun thing about MMA is that we’ll probably see a third fight between these two sooner than later and we’ll see what is more likely to happen.