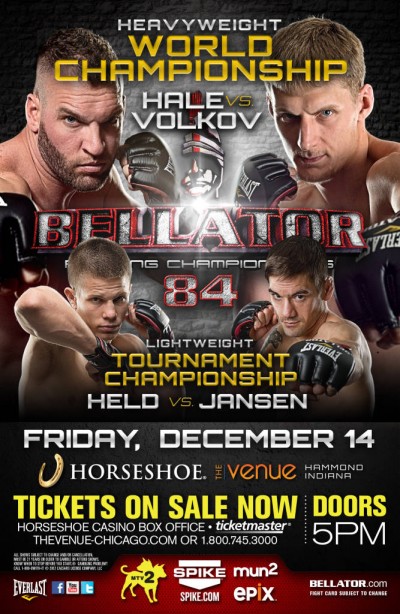 Bellator 84 takes place this evening at the Horseshoe Casino in Hammond, Ind. and features the finals of the Bellator Season 7 Lightweight tournament with Dave Jansen taking on Marcin Held, as well as a heavyweight championship fight between Rich Hale and Alexander Volkov.

Round 2 – Leg kick from Felice. P comes in with a jab, looks for the shot but gets stuffed and taken down easily by Felice. Felice now on top in half guard. P recovers full guard. She throws up a triangle attempt an armbar. Felice backs out and lets her up. P trying to get to Felice but eating a number of punches trying to initiate the clinch. Clinched up now, pressing on Felice, but Felice turns her around with underhooks. Ref separates them. P pushes her to the cage, gets turned around.  Repeat. Looks very similar to the first fight so far. Takedown by Felice, on top in half guard. Felice tries to lock up a choke at the bell. PMN scores the round 10-9 Herrig.

Round 3 – P eats some big shots before getting put on her back. Herrig on top in half guard. Felice stands up, kicks her legs. P stands up and eats some punches as she clinches. Herrig puts her right back down again. P gets up for a split second but Herrig puts her back down. P looks for an armbar but Herrig gets out and takes full mount. Vidonic uses the cage to  get out, goes for Herrig’s leg, sweeps and is now on top for the first time in the fight. P inside full guard, pushes Herrig’s head to the cage with 2 minutes to go. Herrig with full guard. Ref wants action. P with body shots and hammerfists. P postures up as Herrig holds on looking for the standup. Ref stands them up. Front kick, again from Herrig. P gets the clinch but gets put on her back. Herrig traps one arm with a knee and lands some elbows from half guard. Herrig  tries to finish, up kick from P. Bell sounds. They  hug it out. PMN scores it 10-9 and 30-27 for Herrig.

Round 2 – Left straight to the body from Vizcaya, leg kick. Vizcaya with a takedown. Hermansson gets to his feet as Vizcaya gets a body lock, landing knees to his thighs, gets a trip takedown. Vizcaya on top in half guard looking for a D’arce choke. Body shots from Vizcaya as Hermansson sits up against the cage. Hermansson to his feet. Vizcaya pushing him against the cage, knees to the thighs. Vizcaya picks him up for the slam. Hermansson trying to sweep with a kimura.  Vizcaya defends but ends up getting swept. Hermansson inside full guard, postures up with punches. Vizcaya gets up, goes for the takedown, Hermansson sprawls and lands several punches before the bell. PMN scores the round 10-9 Hermansson (could go either way).

Round 1 – Vedepo looks very intense. Gary Copeland reffing. Touch gloves. They tie up. Taylor with the outside trip takedown. Vedepo gets to his knees. Taylor riding him. Vedepo up, body lock from behind by Taylor, drags him down, holding from behind around the waist, knee to the thigh from Taylor, drags him down, one hook in. Vedeop on both knees now and gains top advantage with Taylor’s back to cage. Taylor gets to his feet but Vedepo pressing to the cage. Copeland stops it to cut tape off Taylor’s glove. They square up. Left from Vedepo, Taylor returns same. Clinch takedown from Taylor, moves to side control but Vedepo quickly regains half guard. Elbows to the thigh from Taylor. Right hands from Taylor from the top, he finds the opening, gives one more right to the chin and Vedepo is knocked out. Keep in mind Taylor was still in half guard on top. Big power!

Round 1 – This is for the heavyweight title. Touch gloves.  Couple of left hooks from Hale do not find their target. Left hook from Hale touches the chin of Vokov. Volkov changes his mind on a leg kick attempt and Hale comes in swinging only to get put on his back by Volkov. Volkov stands over Hale, kicks his thighs. Hale pushes on Volkov’s knee with his foot. Volkov lays inside full guard. Stands right back up. Volkov grabs a foot and swings a right but misses. Ref stands Hale up. Left body kick from Volkov. Front kick and a nice left to the chin from Volkov catches Hale coming in, halts Hale’s progression. Leg kick from Hale. High kick from Volkov. Both guys using feints in this fight. Hale with a right, a then a big overhand right that connects on the temple and knocks Volkov to a knee. He gets right up, clinched until the bell. PMN scores the round 10-9 Hale.

Round 5 – They meet in the center and trade in the pocket, both landing. Hale looking more aggressive for now. Eats a couple jabs from Volkov. Hale’s corner was yelling at him between rounds. Left counter from Volkov. Hale stalking. Left from Hale. Volkov circling on the outside. Hale chasing, knows he’s behind. Boos from the crowd. Nice right from Hale but Volkov lands two or three counter left jabs. Hale still stalking. Volkov knows he just has to ride it out. Volkov lands a couple lefts as Hale comes in with his head up. More left jabs from Volkov land as he counters Hale’s attack. Under a minute to go. Jab from Volkov. Boos at the tentativeness. PMN scores it 10-9 and 49-46 for Volkov.