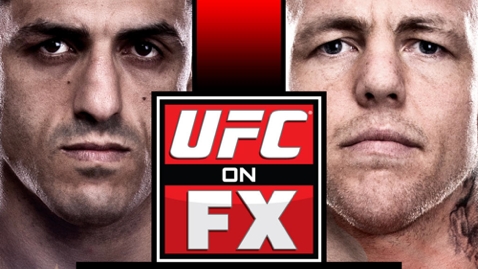 Lombard called out Bisping after the fight, said he wants to put hands on him.

Round 1 – Clinch. Fletcher looking for knees. Parke pushes him to the cage. He gets Fletcher down very briefly but Fletcher back to his feet in the clinch against the cage. Parke gets an outside trip takedown, now on top in half guard. Fletcher trying to make something happen, looking for an arm. Parke working from half guard controlling  with a couple elbows. Parke in side control now. North-south. Parke traps one arm with his knee, now looking for the neck, scramble and Fletcher ends up on top in half guard. PMN scores it 10-9 Parke.

Round 2 – Touch gloves. Leg kicks from Fletcher to start. Parke shoots, stuffed. Fletcher looks for a couple knees, clinched and Parke drags him down. Fletcher looks for an arm, now a leg. Parke defends, gets to side control. Parke locks on a guillotine but Fletcher escapes. Full mount from Parke, elbow, they roll as Parke looks for the neck. Fletcher rolls to his feet. Leg kick Fletcher, left hand a right leg kick. Another leg kick, again inside this time. Left from Parke. Leg kick Fletcher. Again. Parke with a couple kicks, then a nice punch combo connects. Uppercut from Parke. Nice leg kick. Parke shoots and gets the takedown at the bell. PMN scores it 10-9 Parke.

Round 1 – No glove touching here. Slip and rip from Pearson. Left hook from Pearson. Leg kick inside. Jab from Sotiropoulos. Pearson hurts Sotiropoulos with a quick left, he follows up with more punches that stagger him. Sotiropoulos clinches, drops levels. Pearson fights him off. Right from Sotiropoulos. Eats a right. Clinch. They break and square up. Jab from Sotiropoulos. Leg kick drops Sotiropoulos. Pearson lets him up. Right from George. They trade jabs. Body shot from Ross. A jab staggers Ross backward. Left hook from Ross, jab from George. Great head movement from both guys. Jab from George, he shoots, presses Ross to the cage, picks him up for the takedown. Ross gets up but George gets him to his knee, takes his back with both hooks in. Ross stands up trying to fight the choke off. Ross flips and gets out of trouble. George ends on top in side control. PMN scores the round 10-9 for George.

Round 3 – Pearson hurts George with a left hook, he goes down. Ross looking for the finish but George gets back to his feet. Eats a right, left and one more right than knocks him into the air, literally… and Sotiropoulos goes down like a sack of potatoes.