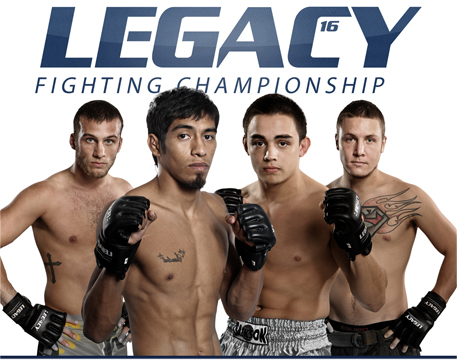 The team at Legacy Fighting Championship are back tonight for their last show of 2012.  This time they move out of home base that is Houston and travel to the Dallas-Ft. Worth area.

The AXS TV broadcast team will be calling all seven main card fights and we will be bringing you the results.

In the co-main event we have a rematch in the featherweight division between Matt Hobar and Steven Peterson. Both from the Dallas area, these men will square off for the second time.

In the first match up an odd injury called it a night when Hobar dislocated his elbow. Peterson, being the true gentleman he is, mocked Hobar and got some heat from the crowd. Peterson got the win and Hobar wants to make it right.

The flyweights take center stage for the main event when Will Campuzano looks to hang the first loss on the record of Jimmy Flick. The winner of this fight will capture the Legacy FC featherweight championship. A solid match up that could be a feverish five rounds of action for the title.