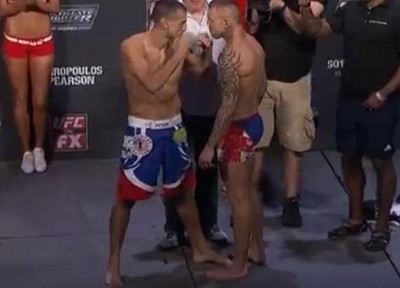 The UFC on FX 6 weigh-in results took place in Australia and all fighters were able to make weight with no issues. The main event will feature former TUF competitors and this season’s coaches George Sotiropoulos and Ross Pearson.

The UFC on FX 6 event will take place at the Gold Coast Convention and Exhibition Centre, and will air on the FX channel.

The UFC on FX 6 weigh-in results are below:

Be sure to join ProMMAnow (www.prommanow.com) for live play by play coverage of UFC on FX 6 on Friday.

One thought on “UFC on FX 6 weigh-in results”