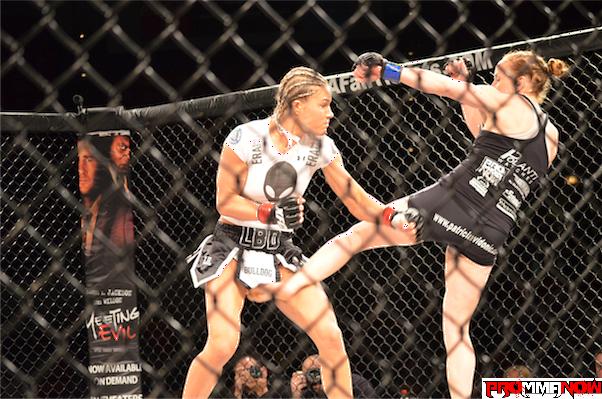 Bellator Fighting Championships will close out its seventh season with Bellator 84 on Friday, Dec. 14, at Horseshoe Casino in Hammond, Ind. In addition to the lightweight and heavyweight tournament finals and a light heavyweight title match, Felice “Lil’ Bulldog” Herrig (7-4) and “Little” Patricia Vidonic (7-3) will clash in a women’s 115-pound bout.

Herrig was originally scheduled to fight old rival Michele Gutierrez (3-3), however, Gutierrez has withdrawn from the bout citing injury. Gutierrez made her pro debut against Herrig back in November 2009, ultimately losing via second round armbar. There has been a lot of back-and-forth between these two online and an eventual rematch seems inevitable.

But first Billings, Montana’s Patricia Vidonic will get her shot at redemption against Herrig after dropping a unanimous decision to her at XFC 17 back in April. Since then, Vidonic racked up a unanimous decision win over Sally Krumdiack (9-6) at CageSport 20 in July and has kept busy by entering grappling tournaments and continuously training, which allowed her to be in good enough shape to take this fight on just two week’s notice.

“I am grateful to be fighting, especially for such a reputable promotion. Thanks to all who support me! There will be no negative words towards Felice or her management, I feel lucky to have a chance to redeem a loss. I want to be able to do what I feel I didnt do the first time, fight!”

For more of “Little” Patricia Vidonic’s thoughts on this bout, stay tuned for the next edition of her weekly ProMMAnow.com blog “The Vidonic Chronicles” as she shares with readers her journey through the world of professional women’s mixed martial arts.