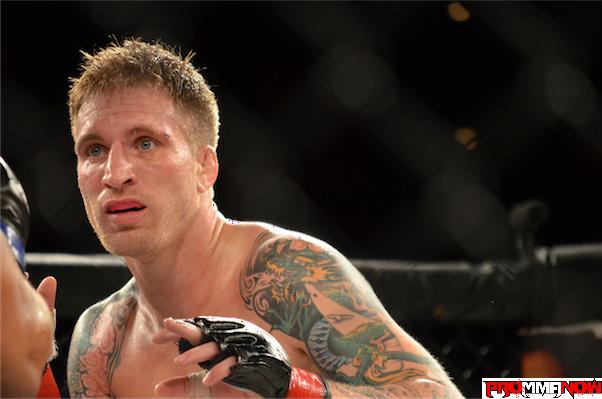 The bout will mark Reynolds’ fourth straight main event appearance inside the XFC (Xtreme Fighting Championships) cage, and his third this year. His XFC run began with a unanimous decision win over Brazil’s Jonatas Novaes (10-4) at XFC 15 in December 2011.

Reynolds returned at XFC 17 in April of this year with a unanimous decision victory over another Brazilian, Luciano dos Santos (9-7). And most recently, Reynolds submitted Blackzilian team member Lorenzo Borgomeo (9-5) at XFC 20 in September.

Reynolds has been in the cage with some of the sport’s biggest names and is on the precipice of reaching that next level of recognition and MMA stardom. But first he has to get through Newell, a young man who should be nicknamed “the slot machine” because with only one fully functional arm he’s been stealing all his opponents’ hopes of victory.

Reynolds was a guest on Pro MMA Now Radio Thursday and we asked him how he sees this fight going:

“If I had to make a prediction of how I think he’s training to prepare for a fight for Eric “It’s a Wrap” Reynolds, he better be doing a lot of stand-up because I like to give the crowd what they come to see. I’m a showman when I’m in the cage. I want to make everyone feel like they got their money’s worth. And if they’re tuning in on TV on AXStv, I want to make sure they don’t change the channel. So, I’m going to bring it to him on the feet. I got the fast hands and the power behind them to finish it there, but I plan on having fun with it. I’ve got 25 minutes to be a nightmare for Nick Newell. I’m just going to have fun. I’m not going to rush anything or make any mistakes; I’m going to capitalize on all his.”

Reynolds’ previous fights inside the XFC cage have all been three rounds. He talked about making adjustments for the five-round title bout:

“I made adjustments in training camp, considering it’s a five-round fight. That’s why my weight’s down right now. I’m really close to the contracted weight right now. I could weigh-in today if the fight was tomorrow. So, I’m ready to go. That’s just going to make it so I have high endurance. I’m used to this weight so my strength is up and my speed is maximized. I have everything. I feel like I’m the total package when it comes to 155 pounds.”

Five of Newell’s eight wins have come via submission, and in many ways it seems as though he has turned what many would consider a “handicap” into an asset. We asked Reynolds if it’s possible to replicate Newell’s unique fighting style in training:

“Yes and no. He was born with it so he’s made those adjustments his whole entire life, so trying to find somebody, a training partner to mimic his style is very hard, but I’m not the tapping out type. You’re not going to see me tap. He’s going to have to rearrange my knee or my ankle for me. I’m going to make the ref feel like it’s just unbearable and make him get the doctor involved or something because I’m not tapping. It’s not in my nature. I’d rather pass out than slap out.”

For those thinking Reynolds is the underdog going in against the undefeated Newell, he’s not buying it:

“You got to be a fool to think that I’m the underdog stepping into this championship fight. Not even considering the fact that I’m fighting Nick Newell, his record is unblemished, but he hasn’t fought nobody. I was at that same point in my career and I was 9-0, with all first round finishes, and you know I got humbled. It happens. It’s MMA. Nobody’s invincible. Everyone’s got a weakness in their game and that night is just going to be his night that he has to get humbled.”

Because Reynolds has been in the cage with guys like Eddie Alvarez and fought over 20 professional fights against opponents with two fully functional arms, it seems almost human nature there could be the danger of him underestimating Newell. Reynolds addressed this:

“I don’t believe so because he has something to prove to himself. He’s a highly determined person and he’s very athletic. He carries a huge frame for 155 pounds. So I’m treating him like he’s Anderson Silva. I’m training like he’s the best fighter in the world. But come December 7th I plan on exposing all of his weaknesses.”

It all goes down in less than a week when Eric Reynolds and Nick Newell clash for the XFC lightweight title. “XFC 21: Night of Champions 2” will air LIVE on AXStv Friday, Dec. 7, at 10 p.m. ET. To listen to our full interview with Reynolds as well as our interview with XFC President John Prisco go here: Pro MMA Now Radio with XFC President John Prisco and Eric Reynolds.

3 thoughts on “Eric Reynolds: ‘I’ve got 25 minutes to be a nightmare for Nick Newell’”