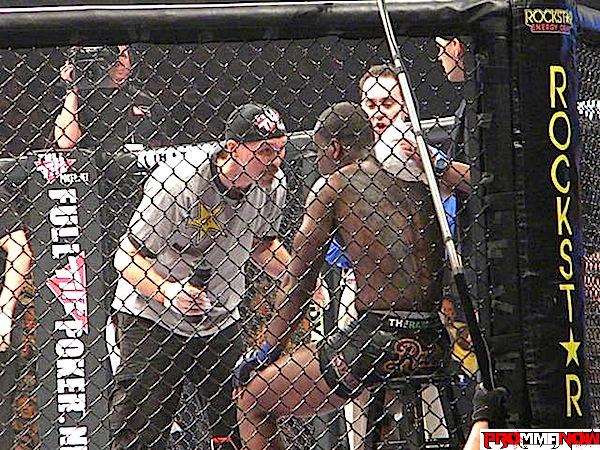 I know you probably couldn’t tell it from my last couple blog write-ups, but occasionally, in my off-time, I actually Coach MMA. One of my longtime students happens to also be one of the best light heavy weight fighters in the world – Ovince Saint Preux.

And as some of you may know he has been a staple of the Strikeforce light heavy weight division for a couple years now. With the implosion of Strikeforce recently I’d like to give you guys an “insider’s” perspective on some things…

So you sit around waiting to see when the internet will tell you that your job is gone… and honestly that’s how I hear about a lot of stuff that concerns me directly.

When Strikeforce finally folds you’ll get to see how good it really was.

A lot of people spend a lot of time talking about how awesome UFC fighters are and pretend like Strikeforce fighters aren’t that good.

I’ve been all over the place with Vince, training at a lot of different camps to get ready for fights (there just aren’t many people in Tennessee / the Southeast who can spar with Vince and not get mauled when he turns up the pressure); camps like Team Quest, Wanderlei’s gym in Vegas, etc.

And I’ve seen a whole host of Strikeforce fighters hang with UFC fighters (if not get the better of them). There’s a reason Dan Henderson asked Vince to come out and help him get ready for his fight with Jon Jones – because guys like Dan know way more than AwesomeGuy42 on Sherdog’s forum…

So right now the Strikeforce stable looks weak because they haven’t been promoted like UFC guys have been (the UFC does a GREAT job at promotion – obviously). But give it a year or two and guys like Mousasi, Jacare and I dare say Ovince will be getting a TON of buzz around them.

Yes, there will be some UFC jitters.

When you fight in Strikeforce or in the UFC you’ll see the same group of people – Burt, Rhett, Francois and crew are there doing the logistics for just about every show.

You might meet with a few different people from each promotion (like the Showtime liaison Annie), but in general the behind the scenes stuff is all the same (“WE ROLLLLLLLLLLIIIIIIIINNNNNNN!!!”).

These things might not seem like that big a deal, but since fighters are so superstitious/OCD it wouldn’t be surprising to see some jitters right off the bat.

Which fighters will be in the UFC?

This kinda harkens back to my first point – we don’t really know. We’ve gotten some pretty strong assurances from people that I trust (yes I used the word “trust” when talking about a promotion in an MMA article… I’m shocked myself) that Vince will get a shot in the UFC.

We’ve talked to a lot of other camps about their guys and their chances in the UFC – a handful of our friends are kinda in the same boat (like SDCA’s Liz Carmouche who I’m sure will fight in the UFC in 2013).

However, I’m never really sure what I can say/write and what I can’t say/write so I tend to be just very quiet most of the time regarding these matters. Like the old proverb goes, “Those that know don’t talk and those that talk don’t know.” (A more true statement could not be made; especially in the MMA world…)

Of course guys like Mousasi and Jacare and Melendez will be there and that really will create some topsy-turvy rankings for a while. In the end, you’ll see some better UFCs in 2013 than you saw in 2012. 100% guaranteed.

For most of Strikeforce’s stable, expect to start seeing them in January/February UFC shows… it’ll happen fast.

If you guys have any questions for me, feel free to leave a comment or e-mail me at eric@knox-mma.com and I’ll do my best to answer your questions.

Good luck and God bless you guys and girls!