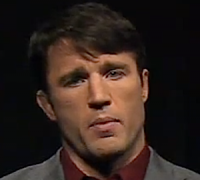 Chael Sonen, considered by many to be the most outspoken man in mixed martial arts, has been confirmed as the returning host of the fifth Fighters Only World MMA Awards ceremony. CBS Sports anchor, Molly Querim, has also been confirmed as co-host. The pair received high praises when hosting the awards ceremony last year.

They will return for the event on Friday January 11, 2013. The awards will once again be held at The Joint at Hard Rock Casino and Hotel in Las Vegas. The awards ceremony is put together by Fighters Only, the world’s leading MMA Magazine.

“Chael did a fantastic job as host last year and we are elated to be able to work with him again,” says Rob Hewitt, President and CEO of Fighters Only. “The commanding presence of Chael combined with the beauty and skill of Molly make the perfect partnership as hosts and we feel sure that they will make this years show even more entertaining.”

Sonnen, is currently in the process of filming for the upcoming season of The Ultimate Fighter, where he will face off against rival coach Jon Jones for the UFC light heavyweight championship. He will step out of the gym and onto the stage for the memorable evening of glamor and celebration of achievements.

The Fighters Only Awards was a smashing success offering a variety of “who’s who” in the MMA realm as they took to the red carpet last year, and this year promises a bigger and better black-tie celebration. The event is sponsored by Bodybuilding.com, the internet’s most visited health and fitness site and largest online retailer of nutritional supplements; along with Sandee (a Fightshop.com brand), the manufacturer of the world’s toughest combat sports equipment and the second-oldest Muay Thai brand in the world; as well as Infinite Labs, one of the fastest-growing, research-based sports nutrition brands in the athletic industry.

The Fighters Only Awards were created to allow fans the chance to vote for their favorite MMA athletes, brands and industry professionals they believe made the most outstanding contributions to the sport for the year. Awards will be presented in 21 different categories, including “Fight of the Year,” Knockout of the Year,” and “Submission of the Year.” Additionally, during the live ceremony, a “Lifetime Achievement Award” will be presented to a surprise recipient. Fans are encouraged to make their choices known at www.worldmmaawards.com or they can also download the free iPhone. The iPhone app is said to make voting easier, will ensure maximum response and will provide the most accurate selection of winners.

With fan tickets priced at just $35 they will surely sell out fast. You can purchase your own ticket through www.ticketmaster.com or directly through The Joint’s box office. Those interested in VIP tickets can check with Fighters Only.

As always, continue to check back at prommanow.com for the latest news.