Chael Sonen, considered by many to be the most outspoken man in mixed martial arts, has been confirmed as the returning host of the fifth Fighters Only World MMA Awards ceremony. CBS Sports anchor, Molly Querim, has also been confirmed as co-host. 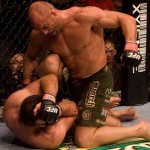 UFC champion, Randy “The Natural” Couture was announced as primary host of the upcoming Fighters Only 2010 World Mixed Martial Arts Awards, sponsored by Bodybuilding.com, at a press conference at the Palms Resort and Casino yesterday in Las Vegas, NV.

Las Vegas, NV (USA) – Fighters Only, the world’s biggest Mixed Martial Arts (MMA) magazine, announces the launch of its 3rd annual awards today. Devised to celebrate success and achievement within the MMA industry, the World Mixed Martial Arts Awards gives fans across the globe the chance to cast their vote on which athletes, brands, … Read more

Coined as the “backpack of doom” by Sherdog’s and ESPN.com’s Jake Rossen, Imada submitted striking artist Masvidal in the third round of Bellator’s season 1 lightweight tournament semi-final in Dayton, Ohio on May 1, 2009.

Fighters Only Magazine held their World Mixed Martial Arts Awards 2009 Wednesday night at the Hard Rock Casino in Las Vegas, Nev. Many of the stars of the MMA world were there, including Dana White, Tito Ortiz, Georges St. Pierre, and Diego Sanchez, among others. A few highlights included the awkwardness of having Dan Henderson … Read more

Fighters Only Magazine is holding their World Mixed Martial Arts Awards 2009 tonight at the Hard Rock Casino in Las Vegas, Nev. MMA fans can watch the event LIVE tonight on the VERSUS website (www.versus.com) beginning at 10:30pm ET/7:30pm PT. The biggest names in the world of MMA will be there to accept their awards. … Read more

UFC lightweight champion B.J. Penn looks back at his fight with Kenny Florian at UFC 101, and his forthcoming title defense against Diego Sanchez, which is expected to take place in November. Penn looked to be on top of his game against Florian and much of that could be due to bringing his training camp … Read more