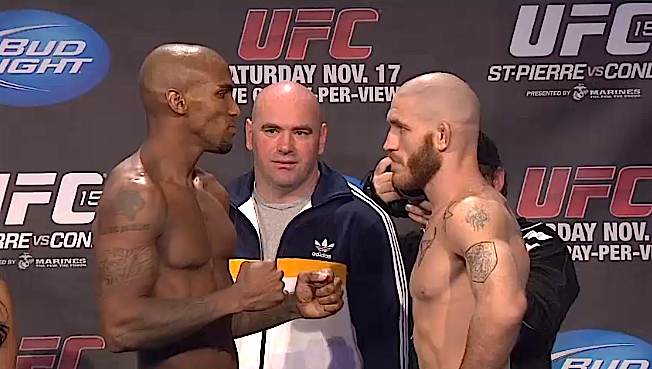 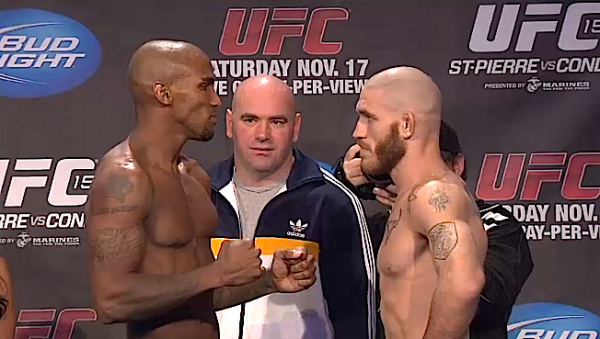 Francis Carmont and Tom Lawlor engaged in a grueling battle of attrition over three rounds as both guys attempted to implement their will on each other. In the end it would be Carmont that would keep his UFC record perfect at 4-0 with a decision victory over Lawlor.

Tom Lawlor wasted little time closing the distance against the dangerous Francis Carmont to start the opening round. After a stall in the action on the cage, the referee restarted the fighters in the center of the octagon. Carmont went to work from the outside with his kicks, especially to the body as he punished Lawlor to the midsection. Carmont easily avoided several takedown attempts by Lawlor, but nearly got finished going for a takedown of his own. As Carmont leaned in looking to take the fight to the mat, Lawlor cinched up an arm-in guillotine and pulled guard, looking to choke out the streaking Carmont. With under 20 seconds to go, Carmont remained calm and survived the submission attempt to finish the opening round.

Carmont mixed up his kicks to start the second, going low with kicks as well as continuing his assault to the body. Lawlor was able to land a couple of lead left hands, but got caught with stiff knees anytime he closed distance to clinch trying to get the fight to the mat. Eventually, Lawlor would get his first takedown but wasn’t able to mount much offense from the top as Carmont fought his way back to his feet. With under a minute to go, Lawlor again took the fight to the mat, then quickly passed to side control. After a scramble, Lawlor again locked up a guillotine but would run out of time once again as the second stanza came to a close.

The third round started like the second, with Carmont coming out with kicks. Lawlor fought with a sense of urgency, throwing combinations as he came forward looking for the takedown, but didn’t land many significant strikes before the action again stalled on the cage. After a restart, Carmont let his hands go, flashing his jab and using his right hand over the top to compliment his kicks. Lawlor went right back to his smothering style, closing the distance and putting Carmont on the cage. Again the action was restarted, and it was Lawlor that continued to grind, landing shots from the outside while pressing the action as time wound down on the bout. After three rounds of action, the bout would go to the scorecards.