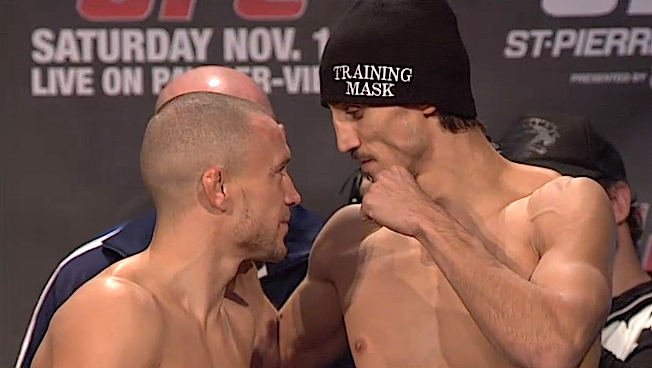 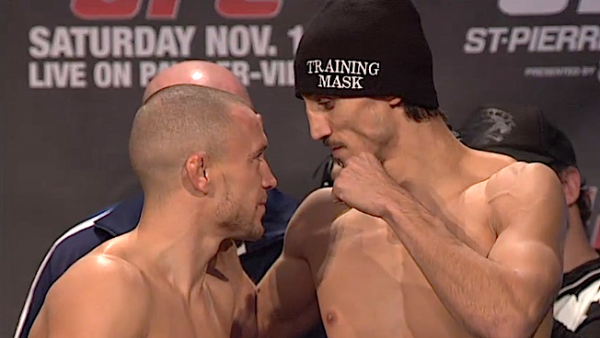 Pablo Garza desperately needed a big performance at UFC 154 after back-to-back losses in the octagon, and he delivered, showing off a well-rounded attack as he battered Mark Hominick over three rounds en route to a unanimous decision victory.

The opening round started quickly and the intensity continued for the entire round as both fighters fought at an incredible pace to kick off the main card. Mark Hominick applied pressure early, looking to establish his rhythm, but it was Garza that opened up with a fluid mix of strikes in the exchanges. Garza stayed at distance and used his length to establish his kicks, and employed a stiff jab to keep the attack of Hominick at bay. “The Scarecrow” also employed perfectly-timed knees as Hominick stepped into range. After a hip toss by Hominick late in the round, Garza nearly secured an armbar, but could not secure it.

After a restart on the feet, Hominick came back with a nasty combination in the pocket, then stunned Garza with a left hook to the body. He followed up with another left hand that dropped Garza. “The Scarecrow” quickly regained his faculties and got back to his feet, then peppered Hominick with an uppercut before opening up the face of Hominick with a sharp elbow to end an exciting opening frame.

Garza came out in the second using his kicks again to establish range. He then went for a takedown and got it, briefly taking the back of Hominick before ending up in the full guard of his opponent. Garza postured and again was able to use his length to further damage the face of Hominick. Short elbows and right hands from the top battered Hominick and gave Garza a ton of momentum going into the final round.

The final round started like the second frame, with Garza going to his kicks early. Hominick continued to come forward, stalking Garza with overhand rights, and short shots to the body. Just as Hominick started to get into a rhythm, Garza again went to his kicks, this time to set up a perfectly timed takedown. From there, he went to work, going to the body, then moving back to the head with elbows from the top. Hominick remained active, trying to mount any type of offense from his back, but the control of Garza continued to score him points as the final round wore on.

In the end, it would be Garza that would be awarded the unanimous decision victory with scores of 29-27, 30-26, and 29-28. The win moves Pablo Garza to 12-3 overall, and stops the losing skid in the UFC, improving his octagon record to 3-2. The loss for Hominick drops his record to 20-12, but more importantly, marks his fourth consecutive loss in the UFC.