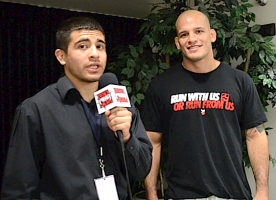 “My jiu-jitsu is adaptable for any rule.”  -Xande Ribeiro

Lister was originally supposed to compete against Kevin Casey, but after Casey withdrew late last month, Ribeiro stepped in as a replacement. Ribeiro came very close to submitting Lister via armbar but the match ended up going the 20 minute distance and was declared a draw (watch the match).

Ribeiro talked about being the only no-gi match on the card, Lister’s dangerous leg locks, his strategy for the match, Lister’s armbar escape, the time limit and rules for Metamoris, the BJJ scene in California and his desire to be invited to the next Metamoris Pro event.

Check out the match between Xande Ribeiro and Dean Lister, as well as the rest of the Metamoris matches here: The Metamoris videos.