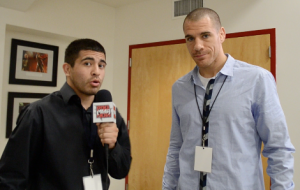 Lovato Jr. comes from the first American family of BJJ black belts and was introduced to jiu-jitsu by his father Rafael Lovato Sr., who was a student of Carlos Machado.

Among his many accomplishments, Lovato Jr. made history by becoming the first American to win the Brazilian National Championship in the black belt division and is considered the most decorated American BJJ competitor in the world.

Lovato discussed competing on Metamoris’ canvas mat, his game plan going in against Kayron Gracie, his conditioning for the 20 minute match, competing in future Metamoris events, who he might like to face next time and what an event like Metamoris does for Jiu-Jitsu.

Check out the match between Rafael Lovato Jr. and Kayron Gracie, as well as the rest of the Metamoris matches here: The Metamoris videos.