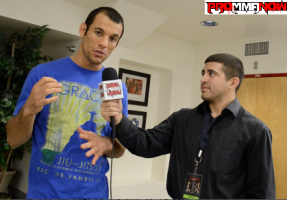 Ryron, who is the son of Rorion Gracie and the grandson of Grandmaster Helio Gracie, discussed being on the card with four other Gracie family members, the BJJ scene in California, his philosophy of “keep it playful” and why not getting tapped out is the most important thing for him.

Ryron also talked about the future of Metamoris and possible rule changes that could be implemented, why it might be a good thing for him to get submitted in a future event and why he considers going the distance with Andre Galvao a victory.

Metamoris was held at San Diego State University and featured match-ups between several of the world’s top Brazilian Jiu-Jitsu black belts. There were no points, the matches had a time limit of 20 minutes and the only way to win was via submission or the fight was declared a draw.

Readers can follow Ryron Gracie on Twitter at @RyronGracie. To learn more about Metamoris visit www.Metamoris.com or follow them on Twitter at @MetamorisPro. See more Metamoris post-fight interviews and stay tuned for even more to come!

Check out the match between Andre Galvao and Ryron Gracie, as well as the rest of the Metamoris matches here: The Metamoris videos.