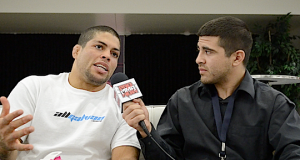 Galvao went for multiple submissions during the match, but after 20 minutes without a submission by either competitor and mainly a defensive posture shown by Gracie, the bout was declared a draw (see the match).

Galvao discussed with us Ryron Gracie’s strategy of primarily fighting to survive and his feeling that the Metamoris format favored Ryron’s style.

Be sure to check out our Metamoris post-fight interview with Ryron also, as he shares his thoughts on the match and explains what his goals and intentions were during the bout. There has been quite a bit of talk regarding which style of BJJ is best — fighting to win or fighting to survive. We’d love to hear your thoughts on this.

Check out the match between Andre Galvao and Ryron Gracie, as well as the rest of the Metamoris matches here: The Metamoris videos.