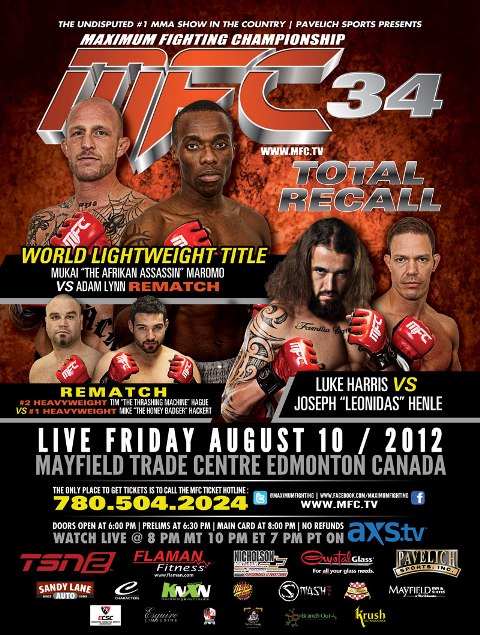 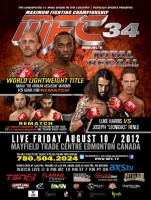 Maximum Fighting Champiosnships took to the Mayfield Conference Centere in Edmonton, Alberta last night for MFC 34 ‘Total Recall”. Airing live on AXS TV the main event featured a rematch in what is widely debated as one of the worst decisions in MMA history. Adam Lynn looked to get on the even side of the judges scorecards in this go round against Mukai Maromo to regain the MFC lightweight title. Lynn took himself out of contention for the belt the night before when he missed weight. The five round fight was re-scheduled for a 3 round battle.

It didn’t take 5 rounds this time or even the scheduled three for the “Afrikan Assassin” to leave no doubt on the victor. Maromo showed excellent speed and superior striking for the night. In the second round heavy elbows and knee strikes started taking its toll on Lynn. One final knee caught connected with Lynn’s chin and the fight was over. For his efforts in the bout, Maromo earned ‘Knockout of the Night” honors.

In another featured bout Tim Hague stepped into the ring to make his MFC debut in an effort to avenge a loss to Mike Hackert. Hague came in to the fight outweighing Hackert by 40 pounds. The weight difference wasn’t a factor as Hackert used precise striking to work the body of Hague. Tim was unable to mount much of a defense to the fast punching and was dropped in the first round. Hackert scored the first stoppage of his career and showed the fans in Edmonton that he belongs atop of the MFC heavyweight division.

Here is the full results from last night’s action.