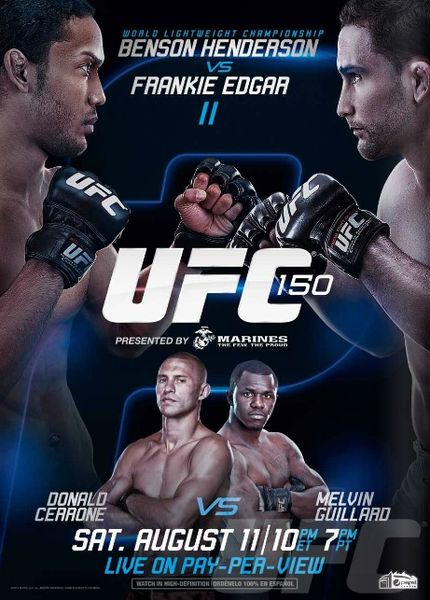 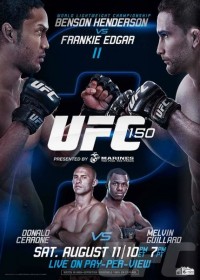 DENVER – UFC 150 takes place this evening at the Pepsi Center in Denver, Colo., and is headlined by a lightweight title fight between champion Benson Henderson and challenger Frankie Edgar.

ProMMAnow.com (https://prommanow.com) will provide live result and play-by-play commentary for each bout. While you are waiting for the fights to start, or if you have a few minutes to kill between fights, check out our ProMMAnow.com UFC 150 staff picks to get our predictions on the fights.

And be sure to check out the UFC 150 post-fight press conference LIVE stream on ProMMAnow.com following tonight’s event.

Round 1 – Nik Lentz makes his featherweight debut. “You set to rock? You ready to get down?” asks the ref. They both shake their head yes. Mitsuoka shoots, knees from Lentz as he stuffs the shot. Mitsuoka shoots again, Lentz grabs a body lock and slams Mitsuoka to the ground, still holding him from behind Mitsuoka gets up, but gets tossed back down. He gets up, clinched, Lentz punches him on the break then puts him back down. Lentz on top in half guard, landing body shots. Up kick from Mitsuoka. Lentz tries to take Mitsuoka’s back as he stands up, slams him down and is riding Mitsuoka’s back looking for the choke, softening him up and with both hooks in. He flattens him out and landing punch after punch to the side of the head until the ref stops it. I’m not sure Mitsuoka landed a single punch.

Round 1 – Pague connects with a right. Camus with a right. Left hook by Pague but Camus lands a left in return. Camus gets the takedown, inside full guard. Body shots from Camus. Pague throws up his legs for a triangle attempt. Camus postures up but Pague is trying to tighten the triangle. Gives him some elbows off his back and is looking to cut him. Camus not offering any offense at this point. More elbows from Pague. Pague eventually lets go the triangle and Camus unloads some elbows. Nice elbow from Camus. Pague rolls into an omoplata but doesn’t control the waist and Camus is free and unloading punches and hammerfists. Pague still trying to make something happen as he throws his legs up. PMN scores the round 10-9 for Camus.

Round 2 – Left hook from Camus, right leg kick. Leg kick again, Pague catches the foot and puts Camus on his back. Pague lays inside his guard but Camus hops to his feet. Let from Camus. One two from Camus. Big left hook from Pague as Camus shoots in. Camus puts Pague on his back, now on top in half guard. Elbow from Camus. Pague trying to isolate the right arm. Camus moves to side control but Pague recovers full guard. Nice elbow from Camus from the top. Pague gives him one back from the bottom. Again. Hammerfist from Camus. Pague tries to get up and does but Camus still has a body lock at the bell. PMN scores the round 10-9 Camus.

Round 3 – Pague shoots, Camus gives up his back, Pague with both hooks in, gets a leg triangle. Pague has him trapped pretty good and softening him up with punches. Camus gets some space, spins and ends up on top in top control inside full guard. Big elbows from Pague off his back. Camus with his own elbow in return. Camus now in half guard. Almost in full mount. Camus drops some elbows from the top. 1:30 left in the fight. Nice punch and elbows from Camus. Full mount from Camus. Pague gives up his back, they roll, both hooks in. Pague is bleeding on his forehead, no doubt from all the elbows. Camus locks on a choke but Pague survives and does a flip with Camus on his back at the end. PMN scores the round 10-9 and the fight 30-27 for Camus.

Round 1 – Bantamweights. Perez with a low kick. Jab from Stone then Perez lands a right. Stone looks hurt. Perez lands two right hands and Ken Stone is done. Perez lands a few more shots to his downed opponent before Herb Dean stops it.

Round 2 – Hamman takes a couple leg kicks off the bat. Another. Kuiper knows he’s hurt. Another leg kick from Kuiper. Hamman landing a few punches but not much on them. Kuiper eating his legs up. He tags Kuiper with a big punch but Kuiper lands more leg kicks then some big punches and Hamman goes down. Kuiper pounces, but Hamman makes it back to his feet. Two big rights and Hamman is practically out on his feet. He looks like a weeble wobble wobbling all over the cage. Kuiper finally lands a huge right that puts him down and the ref shows mercy and stops it. Gutsy fight by Hamman but his leg was jacked. Much respect for answering the bell for round two.

Round 1 – Bermudez gets a takedown about a minute in. Not able to do anything with it and Hayden gets up, lands a body kick partially. Left hook from Bermudez. Right from Hayden, he shoots in. Sprawl from Bermudez. Hayden goes for a leg, eats a knee on the way up. Hayden catches Bermudez with a big knee as he lunges in with a punch, knee connected to the chin and Bermudez goes down, Hayden jumps on his back. He’s up high. Bermudez gets top position. Hayden goes for an armbar but gets slammed off. Bermudez on top in half guard. Elbow from Bermudez. Hayden recovers full guard. Bermudez stands up and Hayden follows. Front kick connects on Hayden, Hayden shoots and this allows Bermudez to sink in a standing guillotine and Hayden taps out.

Round 1 – Nice counter right fro Okami.  Body kick from Roberts. Nice right from Roberts, left jab. Left counter from Roberts and Yushin ties him up. Okami lifts him up for  a takedown but he lands on his feet. Okami holding on from behind, drags him down, he bounces up, gets pulled down again. Roberts goes for a submission, ends up with full guard. Okami inside full guard, moves to half guard. Moves to side control. Ref wants action. Okami gets full mount. Roberts gives up his back. Okami unloads big shots until the bell sounds. PMN scores the round 10-9 for Okami.

Round 2 – Okami takes the center. Nice left hand from Roberts stuns Okami. Okami with a straight left then gets a body lock on Roberts, drags him down. Roberts goes for a guillotine, but Okami is free and Roberts is back to his feet. Okami puts him back down. Okami lays on top in half guard. Full mount from Okami. Roberts gives up his back and covers up. Roberts basically  just gave up. Strange.

Round 1 – Body kick from Shields but eats a couple punches. Body kick again from Shields. Herman ties him up looking for a takedown. No dice. They tie up against the cage. Body shot from both guys.   Shields with a standing headlock, Herman gets out and they trade knees. Shields puts Herman on his back. Shields is on his back. Herman is up and free. Clinched against the cage. Body shot from Herman. Shields goes for a trip takedown, no dice. Shields with over under. Herman with underhooks. This could be tiring Shields out. That may be Herman’s plan. He trains at this altitude. Shields does not. Dirty boxing from Herman. Knee to the body. Shields drops levels, Herman defends. Knee from Shields, knee from Herman. It’s a real grueling clinch war with under a minute to go. Grueling. PMN scores round one 10-9 for Shields, but VERY close.

Round 3 – Body kick from Shields. Jab from Herman. Shields shoots, sprawl. Clinch, uppercut from Herman. Body shots from Herman, dirty boxing. Knee to the body. Herman backs out. Jab from Herman. Clinch. Shields lands a right and shoots for a double and puts Herman on his back. Shields in side control. Elbows from Shields from side mount. Herman gets half guard. Shields with full mount with under two minutes to go. Punches from Shields, elbows. Herman recovers full guard. Elbows off his back from Herman. Shields with forearm shots. Boos from the crowd at the grappling match. PMN scores the round 10-9 and the fight 30-27 for Shields. And this is why Shields does not have a ton of fans. You have to respect what he does, but it’s not very fan friendly. Lots of boos as Shields gives his post-fight interview.

Round 1 – Guillard looks SUPER nervous, non-confident and flat as the names are called. Cowoby looks focused and ready and energetc bouncing on his toes. Touch gloves. Guillard drops Cowboy with a counter left. He drops him. Guillard attacks, lands a big elbow and Cowboy is wobbly. Melvin backs up and takes his time, calms down. Wow. Leg kick from Cowboy. Then Cowboy stuns him with a head kick. Cowboy sees he’s hurt, rushes at him with a right hand and Melvin Guillard is OUT COLD! WOW!  Holy S**t!!! Them boys let it all hang out. The exact polar opposite of the fight prior.

Round 1 – Touch gloves, back to their corners. Ben looks so much bigger. Leg kick Ben. Right counter hook from Frankie. Body kick from Edgar. Left counter from Edgar after taking a left himself. Big big leg kick from Bendo buckles Edgar’s leg. Again. Huge leg kick. Right hand from Edgar on the counter. Again with the leg kick and it drops Frankie, he grabbed the leg of Ben though as he went down. Leg kick from Edgar. Edgar raised his foot to avoid the next leg kick. Knee to the body from Ben, right counter from Frankie, then an inside leg kick. Huge leg kick from Ben buckles the leg but Frankie catches it and puts him down. Ben has a guillotine with 10 seconds left in the round and Edgar survives. PMN scores the round 10-9 for Benson.

Round 2 – Big leg kick from Ben knocks Edgar down, he gets right up. Edgar’s calf is bright red. Right to the body from Edgar. Edgar catches a leg kick, lands a low kick on the back leg, throws a high kick that misses. Huge leg kick again from Ben. They trade in the pocket and Edgar drops Ben with a counter. Edgar with a front headlock, goes for the choke but Ben gets free. Edgar still holding a front headlock. Ben putting one hand down. Frankie’s face is bleeding. Under a minute to go. They are both back up and square up. Ben shoots, stuffed, front headlock from Edgar. Ben backs out. Body kick from Ben. PMN scores the round 10-9 for Edgar.