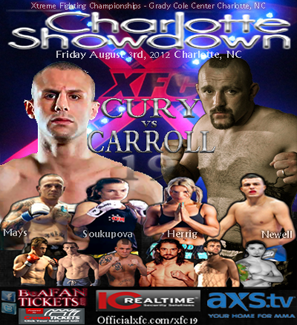 Charlotte, NC.–ProMMAnow.com is live and on the scene cageside for “XFC 19: Charlotte Showdown” at the historic Grady Cole Center. The main event features Charlotte’s own Roger Carroll taking on Nicolae Cury in a welterweight scrap

The co-main event will feature the women as Felice Herrig is set to take on Simona Soukupova. This card also features the inspirational  and undefeated Nick Newell who will be looking to stay undefeated as he’ll be taking on David Mays in possibly his toughest test to date.

ProMMAnow.com  will provide XFC 19 LIVE fight results and play-by-play commentary throughout the evening.

Round 1–The fight begins and Carroll lands a legick and a nice right hand. Tharington answsers. Tharington goes for a takedown and Carroll threatens with a guillotine. Tharington lifts Carroll high into the air and slams him hard to the mat. Carroll lets go of the choke and they get back to their feet. These guys are going at it. They are teeing off on each other with Carroll getting the better of the exchanges. Carroll with a knee to the body as Tharington lands a right hand. Tharington is bleeding from his nose. Tharington with a takedown and lands a couple of nice right hands. Carroll lands an upkick as Tharington tried to posture up. Carroll back up to his feet. They are playing rock’em sock’em with Carroll landing a devastating right hand that drops Tharington. Carroll pounces and is landing some punches from the top. Carroll gets the mount position and rains down punches with Tharington offering nothing in return. The referee jumps in to save Tharington. Carroll wins via TKO in Rd. 1

Round 2–The round begins and Rainey eats a left hook from Buck. Buck lands again and Rainey counters. Rainey with a body kick and Buck shoots for a takedown. Rainey defends. Rainey with a nice right hand. Buck is bleeding again. Rainey lands another right hand and another. Buck lands a left hand. Rainey smiles and lets Buck tee off and Buck lands another one and knocks him out COLD but follows up with punches before the referee can stop the fight. Johnny Buck wins via KO Rd. 2

Round 2–The round begins Hicks throws a kick as Crenshaw shoots for the takedown. They clinch against the cage. Crenshaw with knees to the thigh. Crenshaw with a solid elbow on the break. Crenshaw shoots again and doesn’t set it up. Hicks defends. Crenshaw eats a kick and a right hand and shoots for the takedown and gets it. Crenshaw in the guard of Hicks against the cage now. Crenshaw with a right hand with Hicks looking to push off the cage wit this feet. Crenshaw not doing much now…lands an elbow as Hicks tries to sweep him. Hicks with an elbow from the bottom. Hicks spins for an armbar and gets it.  Wow that was quick. Hicks wins via submission(armbar) Rd. 2

Round 1–The fight begins Forant lands a body kick. Elmore wings a big overhand right and misses. They clinch and Forant works for the takedown. Forant went for a throw but missed and had his back taken by Elmore. One hook in. Forant trying to go out the back door and succeeds. Elmore is threatning with an armbar. Forant stacks him and defends. Forant in top position now. Very technical body on the ground. Forant postures up with some ground and pound. Elmore threatens with an armbar and Forant shoots a knee to the body. Forant escapes the armbar and is back in Elmore’s guard. Elmore tries to sweep but misses. Forant in half guard now. Forant with a couple of left hands. Forant still in half guard. Forant with punches to the body as the bell sounded. Forant 10-9

Round 2–The round begins  and Forant lands a right hand. Forant with the takedown and now in half guard. Forant looing for an arm triangle possibly. Elmore works to full guard now. Forant postures up. Elmore with wrist control. Nice scramble that Forant wins. Elmore almost took his back. Elmore with butterfly guard now and goes for a sweep. Forant escapes and lands a coule of right hands. Elmore with punches from the bottom. Elmore with full guard now. Forant working punches to the body. Elmore trying to set up a triangle choke. Forant passes his guard and lands in side control. Nice knee to the body from Forant. Elmore gets half guard back. Forant trying to pass again. Forant withi knee in belly. Forant in side control. Elmore sweeps and gets to his feet only to be taken back down again. Forant was in top position when the bell sounded. Forant 10-9

Round 3–The round begins. Forant flashing a jab. Forant catches a kick and takes Elmore down and lands in side control. Forant stacks Elmore against the cage. Forant with strikes to the face. Forant in half guard…trying to mount. Elmore trying to push off the cage but can’t get Forant off him. Forant staying busy but not landing anything heavy at the moment. Forant appears to be breaking Elmore at this point with his pace. Forant postures up and tries to unload but Elmore is doing a great job of wrist control. Elmore trying to kick Forant off but isn’t successful. Forant in half guard and now side control. Forant with some punches as the bell sounded. Forant 10-9. All three judges score is 30-27 Forant.

Round 1–The fight begins Herrig with a body kick and a left hook. Soukupova with a right. They clinch and it’s a stalemate so far there. Herrig with a knee to the body and another…and another. Soukupova tries to answer with a knee and they trade knees in the clinch. They have been clinching and not doing much for the past minute. Herrig going for a high crouch single but it’s defended. Herrig with a solid left hand on the break. Left hook and another from Herrig. A right from Herrig. They clinch again. Herring pressing Soukupova against the cage. Soukupova with a kneeHerring with a right but misses the left. Herring runs Soukupova into the cage and they trade strikes as the bell sounds. Herrig 10-9.

Round 1–The fight begins and they touch gloves. Cury  with heavy leg kicks. Carroll goes to his back . Carroll goes for a leg lock. Carroll with a push kick and another. Cury with a body kick. Cury with a huge takedown and mounts Carroll. Carroll escapes and puts Cury against the fence. Cury with another takedown. Carroll with full guard. Cury going body/head with punches. Carroll fishing for an armbar. Cury with a nice lunging punch. Carroll attempting a leg lock. He now goes for a kneebar. Cury defends. Carroll won’t let go and goes for it again. Cury escapes and is in Carroll’s full guard. Cury postures up with a punch. Carroll controlling his posture now. Carroll was going for an inverted armbar as the bell sounds. Cury 10-9

Round 2–The round begins Cury with a jab. and a big right hand. Carroll catches a kick from Cury and goes for a single leg takedown. Cury is defending. Elbows from Cury. Carroll with a high crouch single and gets a huge slam on Cury. Carroll in half guard with Cury against the cage. Cury in full guard now. Cury trying to set up the triangle choke. Carroll trying to pass to side control. Cury tiwht butterfly guard and is looking for the triangle again. Carroll mounts Cury. Carroll with punches. Cury explodes and reverses Carroll and goes for a leg lock. Carroll defends and gets top position. He stacks Cury and now has north-south position. He takes Cury’s back. Carroll working for the RNC as the bell sounds. Carroll 10-9

Round 3–The round begins and they touch gloves. Carroll with a leg kick. Cury with a one two. Cury witha solid jab that snaps Carroll’s head back. Carroll with a jab and closes the distance with a single leg takedown attempt. High crouch single against the cage. Carroll lets the single leg go. Cury with a hip toss and lands in half guard…now full guard of Carroll. Cury with nice series of punches. Cury mounts Carroll now. Cury locks up a triangle as Carroll tries to go out the back door. Carroll escapes the triangle and is in Cury’s full guard now. Carroll with a short elbow. Another. Cury escapes but Carroll takes him back down with a slam. Carroll in half guard as the bell sounded.  Very close round that could have gone either way. I gave it to Cury 10-9…let’s see what the judges say. Judges score it via unanimous decision (29-28 3x) for Cury.

3 thoughts on “XFC 19 LIVE play by play and results”