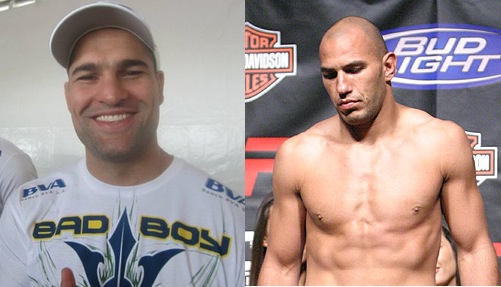 Current UFC light heavyweight champ Jon “Bones” Jones has a date with Dan Henderson at UFC 151 on Sept. 1, and barring any unforeseen injuries or changes, the winner of that fight will face the winner of Shogun vs. Vera next.

White did his best to justify Shogun deserving another title shot if he beats Vera. “Shogun Rua just came off a fight of the year last year and is probably one of the greatest fighters of the last decade,” White said. “Think about it. If you think about the list of guys… This guy knocked out Rampage, knocked out Chuck LIddell, knocked out Mark Coleman, knocked out Lyoto Machida, knocked out Forrest Griffin, knocked out Alistair Overeem twice, submitted Kevin Randleman. You know? A win puts this guy right back in position. And he’s probably the number two guy in the world.”

He also hasn’t won back-to-back fights since 2009  and just lost a unanimous decision to Dan Henderson, but that is beside the point evidently.

Okay. He did win one fight in 2011 against Forrest Griffin, a former champion. We’ll bite.

It’s a stretch, but a Shogun title shot is at least feasible. But what about Brandon Vera? The only fight he’s won since 2009 is a unanimous decision win over Eliot Marshall last October. Marshall came into that fight off a first round TKO loss to Luiz Cane, and his three fights prior to that were not even in the UFC.

Vera can’t be blamed for taking the bout with Shogun, nor for relishing number one contender status should he win. When asked about his response to the critics, Vera simply said, “Make sure and watch me August 4th.”

Then White jumped in. “You know what brother, it’s all about opportunities,” White said. “Brandon is a guy who burst on the scene, was going to be a 205 pound champion, a heavyweight champion, was running through guys left and right. And then, I don’t know what happened, but it’s all about opportunities. He accepted the opportunity to fight one of the greatest fighters of this decade and we’ll see what he does with it.”

Vera was asked how it felt to be given a fight for the number one light heavyweight contender spot. “This is almost like winning the lottery twice,” Vera said. “It feels like all the ups and downs I’ve been through in my career, all the things that have happened in life, it feels like it’s all been okay so far. This opportunity makes all the good, all the bad and all the ugly that has happened so far throughout my career, throughout life, okay. … This opportunity right here, this thing that’s been given to me, it’s a dream come true brother and it makes everything okay and I’m taking full advantage of it man. From training to nutrition to everything. I’ve never felt this good in my life man. I’ve never been so confident, so sure ever, in my life.”

And should the stars align on Aug. 4 and Sept. 1, the possibility does exist that Brandon Vera could find himself standing across from Jon Jones for the UFC light heavyweight championship of the world.

When Vera fought Jones in March 2010 the bout lasted all of 3:19 with Jones winning via TKO and hurting Vera badly enough to put him out of action the rest of the year.

Vera was asked what would be different if he got the chance to fight Jones again. “For sure I’m not looking past Shogun, at all. But the thought has crossed my mind,” Vera said. “The very first time I fought Jon Jones I just thought he was some young punk. I didn’t respect him at all. I didn’t even train hard and I didn’t even pay him no mind, and the outcome showed itself, you know? I got what I deserved for thinking the way I did. So if and when I get the chance to fight Mr. Jones again, I promise he will have my full and undivided attention.”

There are critics who believe the UFC is putting on too many events these days. Is having Brandon Vera, and even Shogun, in the mix for a title shot a symptom of this? Are they running out of top opponents for the 205-pound champion to face?

White denied it. “Anderson Silva hasn’t lost a fight since 2006 in what many would call one of the divisions that isn’t as deep as the 205 and some of the others, but everytime you think there’s no other people to compete, someone pops up,” White said. “We don’t know what’s going to happen on Saturday night. … Shogun fought the fight of the year last year. Look at his resume. He’s one of the greatest fighters of the last decade in mixed martial arts. And then Brandon Vera has this opportunity; this kid could bust out and be the guy everybody expected him to be a couple years ago. You never know what’s going to happen on Saturday. … Some crazy [expletive] might go down on Saturday that might have Jon Jones going, ‘Oh man, this fight’s going to be tough.’ ”

Listen to Monday’s entire UFC on FOX 4 conference call to hear from White, as well as “Shogun” Rua, Brandon Vera, and UFC on FOX 4 co-headliners Ryan Bader and Lyoto Machida.