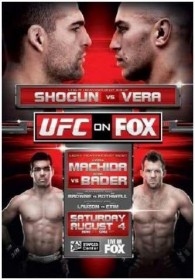 UFC President Dana White hosted today’s call and was joined by “Shogun” and Vera, as well as UFC on FOX 4 co-headliners Lyoto “The Dragon” Machida and Ryan “Darth” Bader. Many of the questions revolved around White’s confirmation that the winner of the Shogun vs. Vera fight would be granted a title shot.

We also got a question in to Bader, asking his thoughts on Vera being tapped for a potential title shot ahead of him, even though he has back-to-back wins, including a unanimous decision over Quinton “Rampage” Jackson in February, and Vera’s only win in the last two years was over Eliot Marshall in October 2011.

Hear all this and more on the UFC on FOX 4 media call which can be heard in its entirety below: