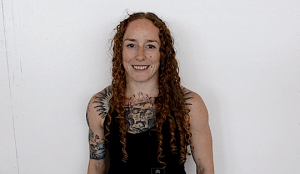 NWFightScene.com caught up with Patricia at the airport after the fight while she was waiting for her flight. Patricia talked about the fight and showed respect for Krumdiack:

“She brought it just as much as I did. I was able to stay on top and just land a whole bunch of elbows from inside the guard and keep her pressed up against the cage. Just listened to my coach and my corner and everything seemed to work out just fine. … She’s got a really good clinch, she’s very strong in the clinch. And her boxing is pretty good, she’s very accurate. She got me with a nice one-two combo in the third round and that’s when I just decided to drive her up against the cage and finish it down on the ground like that. She’s a very good sport and I appreciate her coming out and fighting me.”

This was a big win for Patricia as she had dropped her last two bouts via unanimous decision to two combat sport veterans, Jessica Aguilar and Felice Herrig. Patricia explained how she was able to turn things around:

“I had to go back and I had to re-evaluate some things and just go into the gym and work harder and just do a little bit more. I needed to turn some things around, and I did. I got the fire back.”