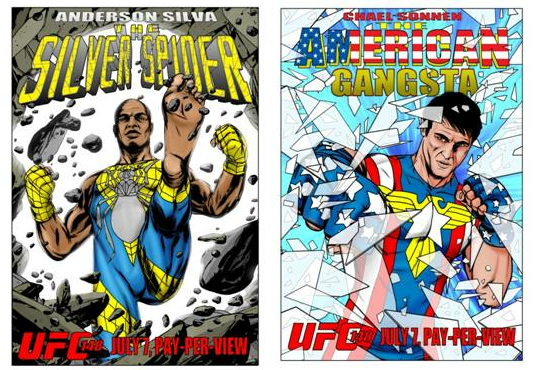 The strip was launched on Sunday and for each day that passes another page of the strip will be published on the UFC’s Facebook page, Facebook.com/UFC leading to the biggest fight of the summer at the MGM Grand, Las Vegas, on July 7.

In the comic strip Anderson Silva dons the tights as ‘The Silver Spider’ and wears an outfit featuring the colors of his beloved Brazil’s national flag. “The Spider” commented, “I’ve always been a comic book fan since I was young. I liked heroes who had everyday problems but still tried to help people.”

Chael Sonnen has been transformed into the “American Gangsta”, and given a patriotic Old Glory color scheme. Sonnen said, “What a thrill, to see myself in comic book form. Never before has a real life super-hero been turned into a mortal in a comic book, you will never see this in your lives again.”

The strip has been drawn by British artist Dave Golding, 37, a professional comic book artist since 2006. Golding was the original artist for the critically acclaimed Dare graphic novel “The Hunter”, which has recently been optioned by Hollywood, and his work has been featured throughout the medium as well as on designs for various science-fiction shows for British television.