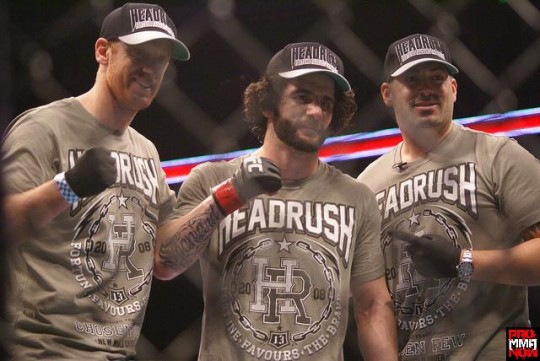 For Charlie “The Spaniard” Brenneman (15-3), 2011 was a year of polar opposite experiences inside the Octagon. Just four months after his upset win over Rick Story (13-5) last June, Brenneman suffered a tough first-round knockout loss to Anthony “Rumble” Johnson (11-4) at UFC Live 6 in October.

Following the loss, Brenneman realized that he needed to make some changes to his training before he stepped back into the cage for his next bout.

“I learned that I was traveling way too much to get in my training,” Brenneman said. “I was spending as much time if not more on the road tha  n I was actually training, and that was taking a physical toll on me. So after that fight against Johnson I was able to condense it, travel a lot less and do the bulk of my training right where I live.”

Those changes to his training paid off this past January when Brenneman was able to rebound and earn a unanimous decision win over Daniel Roberts (12-4) at UFC on FX: Guillard vs. Miller.

Now, “The Spaniard” does the majority of his training at AMA Fight Club in New Jersey where he continues to improve his overall game.

“From fight to fight I have a few tweaks here and there, but most all of my training is now taking place at my home gym, AMA Fight Club,” Brenneman said. “We all are pretty open and vocal with each other and know which areas I need to push harder and maybe back off in other areas, so we’re all on the same page.”

Brenneman also said that he feels great both physically and mentally, which is crucial as he is just days away from facing a young up-and-coming Brazilian who is looking to make a name for himself in the UFC.

This Friday, June 8, Charlie Brenneman will take on Erick Silva (13-2) at UFC on FX 3 emanating live from the BankAtlantic Center in Fort Lauderdale, Fla. The preliminary bouts will be shown live on Fuel TV beginning at 6 p.m. ET (3 p.m. PT) followed by the main card on FX at 9 p.m. ET (6 p.m. PT).

“[Silva] is dangerous,” Brenneman said. “I’ve watched a good bit of his fights, so I feel pretty familiar with his strong points on the ground and his strong points up on his feet too. But you know I’ve fought black belts before. I’ve fought great BJJ guys, great wrestlers, you name it. I just view this as one more kind of challenge.”

So far, Silva’s two fights in the UFC have lasted for a combined total of one minute and nine seconds, which include a 40 second TKO win over Luis Ramos (19-7) last August at UFC 134 and a controversial disqualification loss to Carlo Prater (30-11-1) in just 29 seconds earlier this year at UFC 142. But despite Silva’s strong showing so far, Brenneman still has questions about his opponent.

“You know he’s obviously dangerous because he has only been in the Octagon for a little over a minute, but at the same time we’ve failed to see his overall game,” Brenneman said. “I’ve seen some of his older fights on YouTube. I’m sure he has improved since then. We saw a lot of good things, but at the same time there are a lot of tendencies that we picked up on.”

But questioning Silva doesn’t mean that “The Spaniard” is underestimating his opponent. Brenneman knows that he has to be ready to match the Brazilian’s explosiveness right from the opening bell.

“If I go into this fight on my heels you can guarantee he’s going to come at me like a ball of fire,” Brenneman said. “So I need to meet that fire with fire and give it back to him just as much.”

Charlie Brenneman would like to thank his entire team at AMA Fight Club and No Limits Personal Training. He would also like to thank his sponsors, which can be found at Charlie-Brenneman.com, and everyone else that has helped him out.