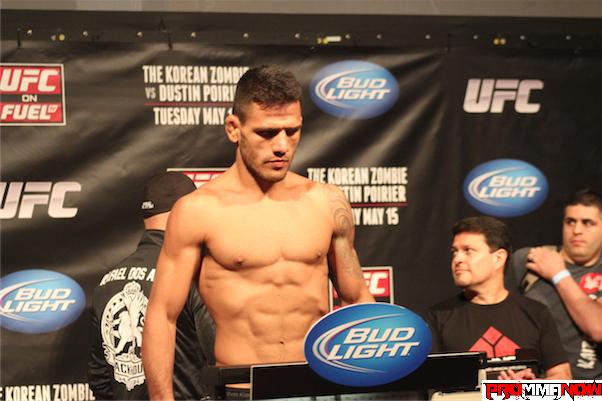 UFC lightweight Rafael dos Anjos (16-6) picked up a quick first round submission win over Kamal Shalorus (7-3-2) on May 15 during one of the featured bouts on the Facebook portion of UFC on FUEL TV 3 in Fairfax, Va.

Early in the round, dos Anjos dropped Shalorus with a well-timed head kick. He immediately pounced with punches before Shalorus could recover, and although some of the blows may have hit the back of the head, dos Anjos sunk in the rear naked choke, forcing the tap at the 1:40 mark.

“I landed the good high kick and then got his back and submitted him,” dos Anjos said after the fight. “I trained a lot for this fight and that was the game plan was to finish the fight as soon as possible.”

Right from the start of the McKenzie bout, the crowd called out for his guillotine specialty and they eventually got just that.

Levesseur did some damage on the feet with solid uppercuts and looked the stronger of the two, shoving McKenzie to the ground. But once he took top position, he found himself in trouble. McKenzie slid on the choke and even though Levesseur knew it was coming, he was forced to tap at 3:05 of round one.
“I went to the Diaz brothers and they helped out a lot with nutrition and diet,” McKenzie said. “I’m real happy to be back with the win.

Asked if he was looking for the choke submission right away, he replied, “It’s never the gameplan. I always think I’m going to knock somebody out, but for some reason it never goes that way. People don’t think I don’t have stand up but I actually don’t have too bad of stand up .If people bang with me, they’ll see.”

Rounding out the Facebook card, Tavares took a unanimous decision win over Yang by two rounds to one in a somewhat tentative affair. Yang showed solid stand-up and footwork to start, but Tavares managed to slow him down against the fence and scored a takedown in the final period that may have sealed the win.

“It feels good to get back in the win column,” Tavares said. “It wasn’t the prettiest fight but I really did try to take his head off.”

Soto tried to circle and jab from the outside and use his wrestling to take Rivera down. However, Rivera used his boxing, knees and head kicks to repeatedly punish Soto, who lost all three rounds but did well to absorb the punishment.

“He didn’t want to stand and trade that much,” Rivera said. “I hurt my hand in the first round but I didn’t care. I just kept going after him and pushing the pace. I knew he wasn’t going to take my punches and techniques and I wasn’t going to gas out.”

Rivera took the fight on short notice but had been in the training room for a previously planned Tachi Palace Fights title bout last week.

In a lightweight bout, T.J. Grant (18-5) outstruck Carlo Prater (30-11-1) at times but mainly controlled the match with his superior grappling. When the fight went to the mat, Grant usually got the better of it, often passing to side control. As the fight came to a close, Grant — who had Prater’s back standing — tossed Prater to the mat and nearly secured an armbar as the horn sounded. All three judges awarded Grant the win 30-27.

Eduardo used his quickness on the outside to repeatedly catch Curran with combos followed by nasty leg kicks.

Curran had some success in round three, following a strange sequence with Eduardo claiming he’d been poked in the eye. The referee didn’t see any illegal blow and insisted that Eduardo continue. Although Eduardo ate a few left hooks, he played it safe and relied on his early lead from the first two rounds.