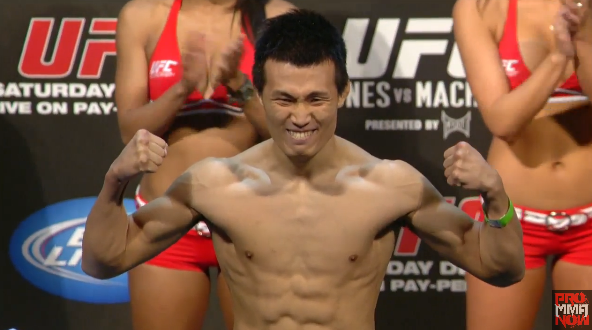 After losing in his first two WEC appearances, “The Korean Zombie” Chan Sung Jung (13-3) on May 15 picked up his third consecutive victory and likely earned himself a featherweight title shot thanks to an impressive win over Dustin Poirier (12-2) at UFC on Fuel TV 3 in Fairfax, Va.

People had high expectations for a contest between two of the division’s best and most entertaining scrappers, and it lived up to the hype.

Following a fairly competitive round one, with action all over the cage, Jung started teeing off, dropping Poirier in the second round and landing some ground-and-pound.

Poirier survived and got back to his feet, but Jung finished the period with a flying knee and a flurry, then countering a takedown and ending up in mount.

In the third round Poirier managed to find his mark with his straight left, catching Jung flush on multiple occasions. The Korean Zombie, though, appeared unfazed, and when Poirier got wild, Jung punished him.

A flying knee from Jung forced Poirier into a desperation takedown that again Jung used to get the mount position. He spun for an armbar and left Poirier fighting off submission attempts the rest of the round.

The end came quickly in round four, with Jung again stumbling Poirier and sending backing up to the cage. Another flying knee found it’s mark, and when Poirier dropped and went for Jung’s legs, he locked on the d’arce choke that left Poirier unconscious at 1:07.

The lightweight co-feature saw Donald Cerrone (18-4) bounce back from his defeat to top contender Nate Diaz and score a one-sided victory over Jeremy Stephens (20-8).

As for the Cerrone-Stephens bout, it unfolded as an entertaining Muay Thai vs. boxing contest in the first round. Cerrone’s reach and leg kicks made the difference and he kept Stephens off balance with the occasional flying knee.

Feeling confident, Cerrone started bringing his hands down to try and bait Stephens, although it almost backfired in the second period when a Stephens overhand right found its target.

Stephens’ eyes gradually began to swell up from the damage, forcing him to cover up more and eat kickboxing combinations from Cerrone. When Stephens tried to close the distance with a lead uppercut, Cerrone punished him with a quick knee to the gut.

The second round came to an end with Cerrone scoring a takedown and Stephens needing a finish.

Before the third round, Stephens’s corner implored him to leave everything in the cage and go for the knockout. However, the comeback didn’t happen and Cerrone closed out the fight with more quick punches and work to the body and legs. Cerrone took the fight by scores of 30-27 across the board.

Cerrone later said that he followed his game plan and dictated the pace, unlike the loss to Diaz.

“The goal of this fight was to fight my fight and not get dragged in to anyone else’s battle,” he said. “Diaz did a really good job of sucking me into his battle. Dictating the pace and fighting my own fight was the plan, so I executed pretty good. I’m a kicker. My hands are second and my kicks are first.”

Early on, Lopez pushed Sadollah into the cage and eventually slammed him to the mat at the end of a takedown. However, Sadollah — fighting in front of his home state fans — worked his way back up and landed knees on Lopez up on the cage from the clinch.

Much of the fight Lopez frustrated the audience, doing little damage and having moderate success getting Sadollah off his feet. Sadollah, meanwhile, controlled things on the outside, particularly with his kicks and knees to the body. In the second round, Sadollah appeared to lock on a tight guillotine attempt, but Lopez was able to drop to the ground and spin out.

The final period saw more of the same, and two of the three judges favored Sadollah’s damage and aggressiveness over Lopez’s positional control.

“This isn’t me being biased towards myself, but I felt like I was doing more to work for the fight,” Sadollah said when asked about the decision. “But I know how much weight the judges give takedowns, so I was surprised and happy that I won.”

Bantamweight Yves Jabouin (17-7) picked up his third straight win in the UFC and kept his record unblemished at 135 pounds with a dominant performance against Jeff Hougland (10-4).

As expected, Jabouin had the much more dangerous striking and picked Hougland apart with jabs, crosses, outside leg kicks, and a devastating spinning back kick to the liver.

After trying his luck on the feet, Hougland tried to get the takedown, but Jabouin stuffed each attempt.

The liver shot came in the first round and looked like it might lead to the end, but Jabouin hesitated for a moment thinking the referee might call the fight. Jabouin then delivered a series of ground strikes as the round came to an end.

Round two was more methodical but all Jabouin, and the TriStar pupil nearly got the stoppage again in round three. Jabouin dropped Hougland with a right hand and landed plenty of ground strikes. Somehow, Hougland gutted through it as Jabouin won the fight 30-26 and 30-27 on two cards.

“I tried everything on this guy, everything in my arsenal,” Jabouin said. “Every time I thought he was gone, he was just still there. I actually almost gassed out in the third round just trying to finish him, but he stayed alive till the end.”

Rounding out the main card, submission specialist Tom Lawlor (8-4) is already widely known for his flashy, off-the-wall entrances and weigh-in shenanigans, so he probably surprised some people when he earned a quick knockout win over grizzled veteran Jason MacDonald (26-16).

MacDonald tried to establish his reach early and stay busy on the outside, but Lawlor hit him right on the chin with a perfectly-timed straight left. He threw a follow-up hook, but it wasn’t really necessary as MacDonald fell helplessly to the mat.

“I … forgot what it was like to win and almost walked off without [my check],” Lawlor joked. “I really needed this win coming off a bad loss, a long lay off, switching camps and moving basically my whole life.”