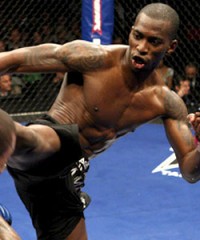 A lightweight bout between Anthony Njokuani (15-6) and Paul Taylor (11-6-1) has been added to the UFC on Fuel TV 4 fight card scheduled to take place June 11 at the HP Pavilion in San Jose, Calif. The main card for this event will air on Fuel TV.

The bout has not been officially confirmed as of yet but it has been reported by both Fighters Only Magazine and MMAjunkie.com.

Anthony Njokuani enters this fight coming off a recent victory over John Makdessi at UFC 145, winning the bout via unanimous decision after going all three rounds.

Since moving over to the UFC from the now defunct World Extreme Cagefighting organization, Njokuani has had mixed results. He currently has a 2-2 record in the UFC, is yet to score two consecutive victories in the promotion and will no doubt look to achieve this against Taylor.

Paul Taylor first competed for the Ultimate Fighting Championship back in 2007 at UFC 126. In that debut bout which took place in Manchester, England, Paul defeated Edilberto de Oliveira via TKO.

Since then, and similar to Njokuani, he has had varied results with a UFC record of 4-5. Although an exciting fighter, Taylor has never quite yet been able to build up a consistent string of victories allowing him to move into the top end of the division.

Stay close to ProMMAnow.com (www.prommanow.com) for more fight announcements as they become available.