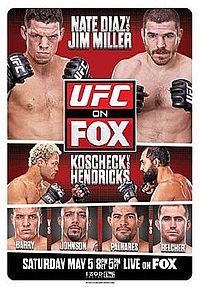 The UFC will be rolling into the Garden State of New Jersey, this weekend for the first time since UFC 128 in March 2011 and looks to have a solid card on paper. There are very important bouts on the card in regards to the welterweight and lightweight divisions. There is also a very important middleweight bout on the card where the winner will certainly vaunt himself up the ladder as a legitimate contender in what has been a fluid division as of late. Let’s get to the three big questions going into this event.

Has Nate Diaz finally solved the puzzle to beating wrestlers?

Nate Diaz is a tremendous fighter just like his brother Nick and has many of the same attributes, including terrible takedown defense that has cost both numerous unanimous decision losses in their careers. All of Nate’s losses in the lightweight division since joining the UFC have coming against fighters with wrestling bases. Diaz has a very active guard while on his back and is capable of submitting a lot of top fighters, but just seems to come up short when dealing with fighters like Joe Stevenson, Gray Maynard, and Clay Guida. Diaz is on a roll since moving back down to the lightweight division as he has won back to back fights, but neither of those opponents had the wrestling base that Jim Miller has. Will Diaz finally jump that hurdle on Saturday night?

Will Josh Koscheck prove to be the ultimate gatekeeper of the welterweight division?

Josh Koscheck has had a successful career in the UFC and has even challenged for the welterweight title against Georges St. Pierre. However, Koscheck has become a fairly one dimensional fighter in his aging years (he’ll be 35 later this year), and probably doesn’t have another title run left in him as long as GSP is the champion. However, Koshceck is still capable of beating most welterweights in the world at this time and he’ll have another chance to prove it when he faces Johny Hendricks on Saturday night. Koscheck won a split decision (I thought Pierce deserved the nod) against Mike Pierce in his last fight back in February. Hendricks is a similar fighter to Pierce but has heavier hands while being the more decorated amateur wrestler. In fact, Hendricks is an even more decorated wrestler than Koscheck as he won two national titles at Oklahoma State University with Koscheck winning one national title in college. Hendricks only 28 years old and is coming off the huge upset KO win over previously #2 ranked Jon Fitch in his last outing. A win over Koscheck could put Hendricks on the fast track to a title shot. I wonder if will have anything to say about that come Saturday night?

Does Alan Belcher have enough talent to get by Rousimar Palhares?

Belcher’s nickname is “The Talent” and he’ll need all of it on Saturday night when he takes on rising middleweight contender and submission ace Rousimar Palhares. Palhares has a nasty reputation of locking on career changing submissions and many fighters are not jumping to the front of the line when he’s named as an opponent. However, Belcher seems to welcome the challenge and will prove a formidable challenge for the Brazilian. In fact, Belcher is arguably the most well rounded fighter that Palhares has faced during his UFC tenure. If not, he’s certainly a step up from the majority of the guys Palhares has faced over the past year or so.

Feel free to post your answers to these questions in the comments section. We’d love to hear your thoughts!