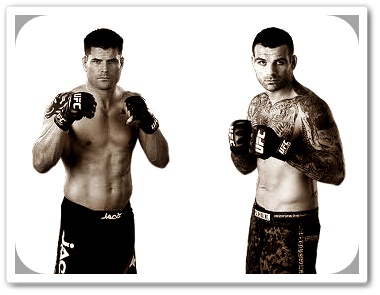 The UFC on FUEL 2 event will feature a middleweight bout between Brian Stann and Alessio Sakara that’s set to take place in Stockholm, Sweden. It’s an important fight for both fighters who are coming off losses after having a nice winning streak beforehand. Let’s see how this one breaks down.

Alessio Sakara (15-8, 1NC) comes into this fight off a unanimous decision loss to up and coming prospect Chris Weidman last year. Weidman agreed to take the fight on short notice after several opponents had to withdraw from the bout with Sakara due to injuries. That fight was over a year ago and Sakara has been battling his own injuries, mainly a torn ACL that Sakara has been rehabbing. Sakara is always touted for his striking skills due to his boxing background, but he is also versed in submissions on the ground.

Brian Stann (11-4) comes into this fight off a submission loss to the number two ranked middleweight Chael Sonnen at UFC 136. Stann was on quite a roll as he had won all three of his middleweight bouts since transitioning from the light heavyweight division. Stann is a big middleweight with knockout power who prefers to stand and strike, but has shown that he is improving his ground game.

I expect this fight to stay on the feet as both guys are primarily strikers. Sakara has the edge in experience, but I don’t expect that to give him a huge advantage in this fight. I think Stann has the clear edge in striking power in this matchup which will probably be the difference maker. Sakara’s chin has been found many times by his opponents as he has been stopped via TKO/KO four times in his MMA/boxing career. Stann will enjoy a two inch reach advantage, so expect him to take a while to find his range but then aggressively attack Sakara once he feels comfortable. Now, Sakara is certainly capable of catching Stann with a big punch and stopping him as he has nine wins via TKO/KO. However, the odds favor Stann winning this one more times than not. It should be exciting while it lasts.