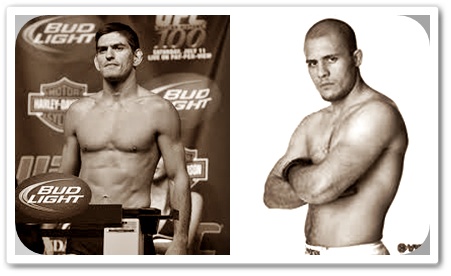 The UFC on FUEL 2 event will feature a welterweight bout between Paulo Thiago and UFC newcomer Siyar Bahadurzada that’s set for Stockholm, Sweden. Bahadurzada isn’t the typical newcomer in that he is a Shooto and Sengoku veteran with wins over UFC veterans like John Alessio and Derrick Noble. It should be a good fight to see where both Thiago and Bahadurzada stand in the grand scheme of things in the welterweight division.

Siyar Bahadurzada (20-4-1) comes into this bout riding a six fight winning streak dating back to 2009, and he has dispatched his last four opponents via TKO/KO. Bahadurzada trains out of former Strikeforce heavyweight champion Alistair Overeem’s old camp at Golden Glory, so you know his comes with a good striking pedigree. He is versed in submissions and tends to favor chokes to finish his opponents, but he has been submitted twice in his MMA career. Bahadurzada will be the first Afghan born fighter to fight in the UFC.

Paulo Thiago (14-3) is coming off a unanimous decision win over Derrick Mitchell at UFC 134 in his native Brazil. Thiago desperately needed that win as he had lost his last two bouts prior to the Mitchell fight. All of his losses have come against top welterweights, but he is best known for his huge upset KO win over Josh Koscheck in his promotional debut at UFC 95 in 2009. Thiago has unorthodox, but effective striking and is a blackbelt in Brazilian jiu-jitsu.

This fight should be entertaining as it’s clear that Bahadurzada likes to strike and knockout his opponents while Thiago is comfortable enough with his striking that he doesn’t shoot for takedowns relentlessly like many grappling based fighters. However, he may need to look to take Bahadurzada down as it appears that is where he could be most vulnerable with half of his losses coming via submission.

Bahadurzada has been fighting since 2002, so I don’t expect nerves or jitters to affect him much as he makes his debut. I think he’ll look to keep the fight standing and go for the knockout. He will need to be cautious as Thiago does have power in his unorthodox strikes and will wing punches from weird angles.

Thiago needs to turn this fight into a grappling match, but could have trouble doing so as Bahadurzada is naturally the larger man who used to fight at light heavyweight and middleweight. Thiago will need to close the distance with strikes before using a bodylock and leg trip of sorts to get Bahadurzada on the ground. Thiago is comfortable there and has a much better shot at winning this fight in that position.

I think I’m going with the newcomer in this one. I’ve only seen bits and footage of Bahadurzada, but he’s not higly touted for nothing. I expect him to keep the fight standing and take Thiago out via TKO. However, one can’t discount the Brazilian as he has been in there with some of the best the world has to offer. He’ll need to execute a great gameplan to win.