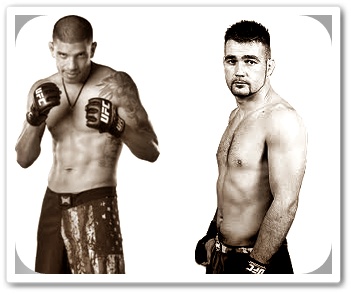 The second fight on the UFC on FUEL 2 card set for Stockholm, Sweden, will feature a welterweight battle between TUF 9 finalist DeMarques Johnson and English fighter John Maguire. It’s a fight that features two fighters coming off wins in their last outing who are looking to seperate themselves in a crowded welterweight division.

DeMarques Johnson (16-9) is coming off a big KO win over TUF 11 alum Clay Harvison which took place on the UFC on FOX 1 card last November. Johnson has enjoyed moderate success since losing to James Wilkes in the TUF 9 finals as he has gone (4-2), including a loss to TUF 7 winner Amir Sadollah Johnson. A fight that Johnson took on two weeks notice. Johnson is a fairly well rounded fighter that has more wins via submission than via TKO/KO, but is certainly capable of putting fighters away via either method. He rarely lets fights go to the judges as he has only done so three times in 25 career fights.

John Maguire (17-3) comes into this fight off a unanimous decision win over Justin Edwards at UFC 138 last November in his promotional debut. The BAMMA and Cage Rage veteran hasn’t lost since 2010 and is riding a six fight winning streak. Maguire likes to take his opponents down to look for submissions and/or grind out decision wins. He was had nine takedown attempts against Edwards while being successful on six of them, while going for two submissions and passing the guard of Edwards multiple times. Edwards has been stopped via TKO once in his career, and has never been submitted in MMA.

I’ve pretty much laid it out there for this fight. Maguire is going to look to take Johnson down to look for a submission or potentially grind out a decision win. Johnson has been submitted a few times in his career, but a number of those losses were early on. He’ll be looking to keep this fight on the feet and try to knock Maguire out, but if taken down you can look for Johnson to go for his favorite submission which is the triangle choke. Johnson has long limbs which allow him to cinch the move a bit easier than most as half of his submission wins have come via that method. I tend to think that Maguire will be ready for that on the ground, so Johnson’s best strategy is to keep the fight on the feet. However, I’m not sure he’ll be able to do that as he has exhibited mediocre takedown defense at best in the UFC. Johnson is probably one of if not the most dangerous fighter that Maguire has faced at this point, so it should be interesting to see how it plays out.

I’m like Maguire via decision in this one as I think takedowns will be the difference maker. However, I would not be surprised to see Johnson get the win either.

2 thoughts on “UFC on FUEL 2: DeMarques Johnson takes on John Maguire in a welterweight showdown”