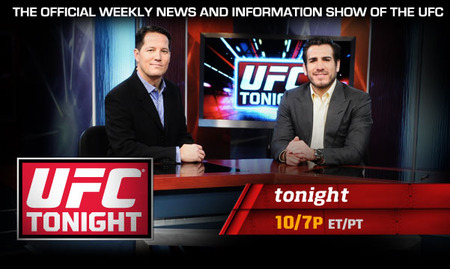 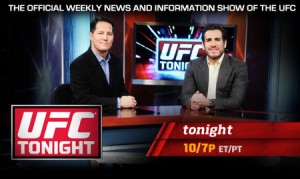 The guys will also preview Saturday’s “UFC on Fuel TV 2” card from Sweden and headliner Alexander Gustafsson will beam in via Skype to talk about his light heavyweight match-up against Thiago Silva. In addition, Mark Munoz takes viewers to MMA school with UFC 101, Kenny Florian shares his thoughts on fighters who cheat using PEDs and a new bout is added to UFC 149 — all this and more on “UFC Tonight”.

Kenny Florian on PEDs in MMA: “As a clean fighter, the whole issue of performance enhancing drugs in MMA really pisses me off. This sport is about honor, technique and discipline. As a fighter, if you use PEDs, how does it feel good knowing that you won using them? Don’t do it, dummies!”

“UFC Tonight” Insider Ariel Helwani on Alistair Overeem testing positive for elevated levels of testosterone: “Overeem tested a 14-1 testosterone to epitestosterone ratio level. Nevada has a limit of 6-1. He can request they test another sample of his urine. If he wants to fight, he needs to appear on April 24 in front of the Nevada State Athletic Commission and explain why he tested that high to get his license. The UFC is waiting to see what happens on April 24 to make a decision about the fight.”

Florian on Dan Henderson as a possible replacement for Overeem: “You’ve got to love Dan’s enthusiasm to fight for the heavyweight title. But the reality is Dan Henderson is a small 205, and he really should be at 185.”

Florian on Mark Hunt as a possible replacement for Overeem: “Hunt is a heavy handed fighter and has a granite chin, but he hasn’t beaten the top opponents and doesn’t have the resume to fight for it yet.”

Florian on Fabricio Werdum as a possible replacement for Overeem: “Fabricio Werdum is almost there. He was phenomenal against Roy Nelson. Maybe he’s a fight or two away from it.”

Alexander Gustafsson on fighting in his home country: “I’m super excited. I’m super motivated. There’s no pressure at all. It’s a dream come true. I’m just doing what I love to do.”

Gustafsson on if Thiago Silva’s long layoff will factor in the fight: “I have no idea. I’m prepared for the best Thiago – I hope it’s the best Thiago to fight on Saturday.”

How Gustafsson has changed since his last loss to Phil Davis: “I’m a whole new fighter since my loss to Phil. I’ve been learning a lot from my loss. I do this full time now. Everything I do is MMA now. I live it, eat it and sleep it.

Gustafsson on Thiago Silva’s strengths: “He’s a really good grappler and he’s strong from the top. I have my game plan and tactics, and I’m going to do my thing.”

Florian on Thiago Silva: “Thiago Silva is a big 205. He’s a black belt in Brazilian Jiu-Jitsu and has some heavy ground and pound. He’s definitely looking to finish Gustafsson and I can’t wait for the fight.”

Thiago Silva on his upcoming fight with Alexander Gustafsson: “In this fight, I’m going to fight like a true warrior. Everyone knows my style. When I go into the cage, I’m going to do or die. I’m going to be ten times more aggressive than anyone’s ever seen me.”

Helwani on Alessio Sakara’s mindset after not fighting for two years: “It’s really good right now. It’s been a rough two-year stretch for him. He’s lost a person he considered to be his father, who was his trainer, prior to UFC 116. Then he lost to Chris Weidman, and then he tore his ACL. He’s been on the sidelines and hasn’t won in two years. But he’s back fighting Stann, and he feels no pressure and loves the match up.”

Helwani on first Afghani fighter in the UFC: “Remember the name Siyar Bahadurzada. A lot of longtime MMA fans have been waiting to see him fight. He was supposed to debut in January, but he broke his hand before the fight. He told me that growing up in Afghanistan really shaped who he is. He told me last week about a time when he was younger and walking with father and brother through a firefight and they had to step over dead bodies. He’s one of the hardest punchers at 170.”

Helwani on Dennis Siver’s move to Featherweight: “He told me recently that guys at 155 are getting bigger and stronger, and felt he was at a size disadvantage. But he also told me he could move back up after this fight, so don’t close the door at 155 yet.”

Florian on Siver’s first fight at 145 against Nunes: “He has to make sure his weight cut goes well. Then he has to mix it up and keep Nunes guessing in the fight.”

Kenny on if Brock Lesnar’s legacy hurt with move back to wrestling: “I believe he should be in the Hall of Fame because he’s a world champion. Every time he fought, he brought in the biggest Pay Per View audiences.”