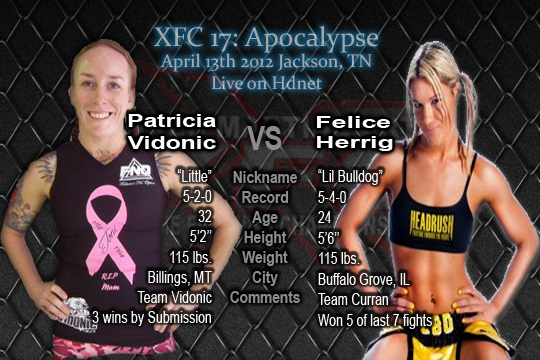 Fresh on the heels of a Feb. 10 event in Knoxville, Tenn., Xtreme Fighting Championships will return to The Volunteer State on April 13 with “XFC 17: Apocalypse” at the Oman Arena in Jackson.

Headlining the card, which will air LIVE on HDNet, is a 155 pound match-up between Bellator and XFC veteran Eric “It’s A Wrap” Reynolds (14-5) and Brazil’s Luciano “Macarrao” Dos Santos (9-5).

Reynolds has been in the cage with guys like Eddie Alvarez, Jorge Masvidal and Rob Emerson, to name a few. He’s coming off a unanimous decision win over Jonatas Novaes at XFC 15 this past December.

Dos Santos has fought the majority of his career in Brazil. He is riding a three fight win streak, ending two by way of first round knockout. He last fought in July 2011, winning a unanimous decision over Harris Norwood in Atlanta.

In the co-headliner UFC veteran Corey “The Real Deal” Hill (5-4) returns to action against Nicolae “The Armor” Cury (6-2) at welterweight. This bout was supposed to take place at XFC 16 in Knoxville but Hill was forced to pull out due to injury. Both fighters picked up first round submission wins in their XFC debuts last year.

Also on this card, in a special treat for women’s MMA fans, it was announced Monday that Felice “Lil’ Bulldog” Herrig (5-4) will do battle with ProMMAnow.com’s own “Little” Patricia Vidonic (5-2) in a 115 pound match-up. Despite their nicknames, this is a big fight, and an important fight for both gals.

Herrig made her XFC debut this past December, dropping a unanimous decision to Team Oyama’s Carla Esparza (6-2). Prior to that she had won back-to-back bouts, against Andrea Miller in March via first round TKO, and against Nicdali Rivera-Calanoc in May via unanimous decision.

Vidonic dropped a unanimous decision to ATT veteran Jessica Aguilar (13-4) this past weekend.  Prior to that she had put together five straight victories, including submission wins over Kyane Hampton, Lacey Schuckman and Chelsea Colarelli.

Patricia spoke to ProMMAnow.com (www.prommanow.com) Monday evening about getting this high profile bout with Herrig immediately after her fight with Aguilar:

“I’m stoked to be fighting live on TV, in a reputable promotion, and against another challenging opponent. John Prisco contacted me the day after my fight with Jag.”

XFC 17 will mark the promotion’s first event in West Tennessee and the second of three XFC events planned for The Volunteer State in 2012. “I am really excited about Tennessee,” said XFC President John Prisco. “Knoxville was a great town for us and I can’t wait to take the show to West Tennessee in April and then Nashville in June. The fans in Tennessee have been great and supported us for years. I can’t wait to show the world what kind of fighters come out of the MidSouth.”

The complete XFC 17 line-up as it currently stands is as follows: