Sean “The Destroyer” Loeffler set to explode in the UFC‏ 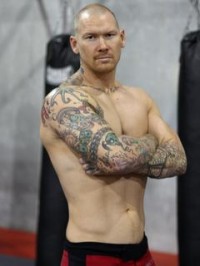 Los Angeles, CA (USA): With fighters such as Anderson Silva, Chael Sonnen, Michael Bisping, Mark Munoz, and Vitor Belfort populating the UFC middleweight division, there is no shortage of colorful personalities and exciting competitors representing the 185-pound weight class in the Octagon.

It’s about to get a bit more colorful and exciting, however.

Sean “The Destroyer” Loeffler will make his UFC debut at “UFC on Fuel 1: Ellenberger vs. Sanchez” next Wednesday, February 15th. His opponent that night will be Jackson’s MMA fighter Buddy Roberts (11-2). Loeffler is a longtime fixture of the fight scene on the West Coast, having competed multiple times in Gladiator Challenge. He made his debut back in 2000, but other than one fight with Bellator, “The Destroyer” hadn’t been given the opportunity to show his skills on a national platform.

That will change next week. And Loeffler is feeling very confident about it.

While “The Destroyer” has dominated the competition throughout his career, some have questioned the level of competition he’s faced, as there aren’t a ton of well-known fighters amongst his list of victims. Loeffler has strong feelings on the subject.

“Well, I just beat a 6-2 fighter in eight seconds. Before that, I fought a guy with 25 fights and 12 decisions, and beat him in 59 seconds…fastest loss of his career. I fought a forty-fight veteran in his hometown and shut him up, choked him out, and before that, I beat a last-minute replacement in fourteen seconds…knocked him the hell out. And before that I beat a 5-1 guy in 55 seconds with a knockout. Only lost to an arguably top-ten fighter within three weeks of my coach being shot and killed, and have won twelve out of my last thirteen fights…all in first round. So, yeah, the ‘well-known’ guys want nothing to do with me.”

But before he can get to some of those “well-known” fighters, he’s got to go through Buddy Roberts.

“And to the fans…a simple THANK you all! I won’t disappoint…and, oh yeah, go to the bathroom early so you don’t miss it!”