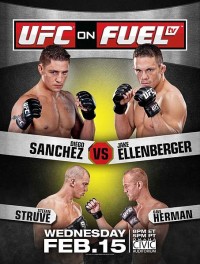 Herman discussed his upcoming fight with Stefan “Skyscraper” Struve  (22-5) which takes place next Wednesday, Feb. 15, in the UFC on Fuel TV 1 co-main event. The bout will mark Herman’s sophomore appearance inside the Octagon following a second round TKO “Fight of the Night” win over John Olav Einemo at UFC 131 last June.

Herman was scheduled to fight Mike Russow in October at UFC 136 but the bout was cancelled after Herman tested positive for marijuana in a preliminary fight drug test. The Team Quest fighter denies using the prohibited substance.

Press play or right-click on download to save to your hard drive:

One thing everyone who faces Stefan Struve has to deal with is his height. When asked how he prepared for the 6 foot 11 inch heavyweight, Herman, who is 6’5″ himself, did not seem too worried.

Herman claims his conditioning has improved thanks to a new rather unusual training method. “I was running,” he said. “And for my last fight I was biking everyday to practice which helped a little. Well, I quit doing all that, and now I just play trampoline cage ball. … It’s fun, it’s good cardio.”

Yes, he said “trampoline cage ball” in case you missed it. Don’t worry, he explains how to play in case you want to maybe try it out for yourself. In addition to better cardio, “Pee Wee” also hopes to show off some improved striking.

“I’m still me, hopefully just a little bit better version of me,” Herman said. “I’ve been focusing a lot on striking, it’s always been my weakest area technique-wise. And hopefully I can kind of showcase that in this fight, even though he’s way taller than me and has a longer reach than me. And also my cardio I think has come along nicely, thanks to cage ball.”

Herman has been critical of Brazilian Jiu-Jitsu in the past, saying it is mostly trickery and that it won’t work on him. And although 15 of Struve’s 22 wins have come by way of submission, Herman doesn’t seem concerned. “He’s long which kind of makes it easier to lock stuff up, but I’m not really worried about it,” he said.

Sports fans can listen to 102.5 FM online 24/7 or tune in every Thursday morning for LIVE MMA talk at www.1025thegame.com. ProMMAnow.com (www.prommanow.com) is the exclusive home of the 1st Quarter’s MMA archives.