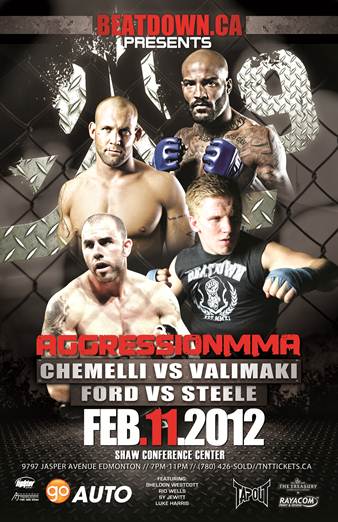 Card to feature eleven action-packed bouts in all

Edmonton, Alberta (Canada): Aggression MMA, one of the very best fight promotions in Canada, today revealed the full fight card for its upcoming AMMA 9 event, which is slated to hit the Shaw Conference Centre on Saturday, February 11th in Edmonton, Alberta, Canada. In the two co-main events, top Canadian welterweight Ryan “The Real Deal” Ford will take on the challenge of the very talented and very dangerous Tyson “The Man of” Steele. In the other feature bout, rising Canadian fight star Tim Chemelli will look to add UFC veteran Victor Valimaki to his list of victims. Also making his return to Aggression MMA will be another top young Canadian 170-pounder in Sheldon Westcott. In addition, AMMA 9 will feature well-known Canadian competitors Rio Wells, “Big Bad” Stephen Beaumont, and Markhaile “Showtime” Wedderburn.

In short, this card is stacked! Here is the full fight card:

This event will take place at the Shaw Conference Center on Saturday, February 11th. Tickets are available over the phone at (780) 426-SOLD, or online atwww.TNTTickets.ca. Canadian fight fans won’t want to miss this incredible event!

“What a stacked card ‘AMMA 9’ has turned out to be,” stated Aggression MMA Co-Owner Moin Mirza. “With the talent we’ve been able to bring in for this event, I would feel comfortable putting this card up against just about any other event here in Canada.”

Ryan “The Real Deal” Ford (16-4) is one of the top MMA stars in Canada. Ford was upset by David Hulett in his last bout, but before that defeat, he had won four straight fights, as well as eight of his last nine, finishing all his victims on either punches or submissions. In 2011 alone, he conquered Johnny Davis, former UFC welterweight contender Karo Parisyan, and fellow top Canadian Nick Hinchliffe in succession. Now looking to rebound from the Hulett loss, “The Real Deal” is motivated with a burning desire to show the fight world he truly is the next elite Canadian fighter.

Ford faces no easy task in his return bout, as he will step in the cage with rising star Tyson “The Man of” Steele (8-1). Also rumored to be on the radar of the UFC, Steele is one of the most exciting Canadian competitors on the circuit. Having never been to a decision, Steele has submitted seven of his eight victims, and knocked out the other one. A native of Saskatoon, Saskatchewan, the 6-foot tall Brazilian Jiu-Jitsu specialist is ready to add “The Real Deal” to his list of victims and make a huge splash in the process.

“This is a huge opportunity for me, and I am grateful to Aggression for making it happen,” says “The Man of” Steele. “I want to make it to the UFC, and this could be the fight that puts me one step closer to the call that every fighter dreams of. I know what I have to do to get there, and that’s take on the best and beat the best. Unfortunately for Ryan Ford, he’s put himself right in my path, and I’ve got to go through him.”

Edmonton, Alberta native and local favorite Victor “The Matrix” Valimaki (16-8), a former holder of the TFC Light Heavyweight Championship, will look to right the ship as he collides with another rising Canadian star in Tim Chemelli (8-1). A former UFC fighter, “The Matrix” is going through a rough streak in his career, but is determined to get back in the win column at the expense of his young foe. Valimaki holds victories over MMA legend Dan “The Beast” Severn, and UFC veterans Vernon “Tiger” White and Jason “Dooms” Day. Chemelli, a member of Team Sparta and a native of Alberta, has finished all eight of his opponents in his victories, but is coming off his first career loss. The defeat came at Aggression: “Unfinished Business” last year against Nick Penner. Now this finishing machine will look to come back strong and grab victory against a UFC vet in Valimaki.

Also competing on the card will be tough Canadians Stephan Beaumont, who is undefeated at 4-0, and strong Muay Thai fighter Markhaile “Showtime” Wedderburn will put their skill sets on display once again for the Aggression fans.