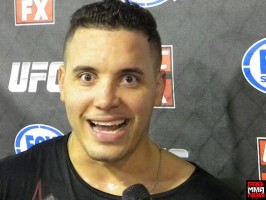 ProMMAnow.com (www.prommanow.com) spoke with UFC heavyweight Pat Barry at Wednesday’s open workouts at Nashville MMA in Nashville, Tenn. After Pat got done destroying the heavy bag and working on his wrestling with teammate Cole Konrad he took a few minutes to discuss his upcoming bout with Christian Morecraft which will be part of the televised main card on FX Friday night.

Barry feels Morecraft will do like most of his opponents and look for the takedown once he starts letting go some strikes. Barry said it is no secret that everybody’s best chance of winning against him is on the ground. And while he admits it is not impossible for Morecraft to win the stand-up battle, he also says it is highly unlikely.

Barry was practicing takedowns during the open workout and said he will submit someone during a fight one day. He answers the question if he would be interested in a future match-up with K-1 champ and fellow UFC heavyweight Alistair Overeem and also discusses the retirement of his former training partner Brock Lesnar. Stay close to ProMMAnow.com for more exclusive UFC on FX 1 coverage.