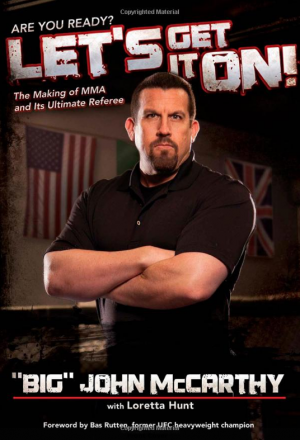 In the early days of the UFC, long before Dana White and the Fertitta brothers were running things, it was much like the wild west. But one man who has been there from the start is referee “Big” John McCarthy. He was the sheriff inside the Octagon in those early days and he is still in there today. The man has literally seen it all.

Because McCarthy’s autobiography “Let’s Get It On!” is so chock-full of information and MMA history, a normal book review just does not seem appropriate. Instead, over a few segments, ProMMAnow.com (www.prommanow.com) will highlight various excerpts from the book that will give a broad overview of the content within, while at the same time, hopefully, entertaining and enlightening those who wish to know more about the history of modern day mixed martial arts and one of its most influential figureheads.

As Real as It Gets?

You could be online playing casino games at Kucasino. But instead you are here learning about the UFC. it might be shocking to MMA and UFC fans to learn that the sport’s most identifiable and probably most respected referee believes there have been fixed fights inside the UFC Octagon.

“During the semifinal match between Oleg Taktarov and Anthony Macias, I believe I saw my first fixed fight in the UFC. Both fighters had the same manager, Buddy Albin, so I think it was decided backstage that Macias would throw the match so Oleg could advance to the finals and face Tank [Abbott] as fresh as possible. The fight went a little too smoothly for my tastes when Macias shot in and nearly fell into the guillotine choke, which he tapped out to in twelve seconds.” (from page 194)

Actually, Taktarov’s official time for the submission win is listed at nine seconds. And if the goal was for Taktarov to be fresh, it must have worked, as he went on to win in the finals, ultimately submitting Tank Abbott via rear-naked choke at the 17:45 mark.

Would Don Frye really do that?

On Dec. 7, 1996 at Ultimate Ultimate 96, McCarthy believes it happened again:

“Unfortunately, this night was the second time I felt I  was refereeing a fixed bout. In the semifinals, Don Frye and Mark Hall met in a rematch of their UFC 10 bout. In their first encounter Frye had beaten the piss out of Hall, who’d refused to give up. Here, though, Frye ankle-locked Hall to advance to the finals without breaking a sweat.”

“The fight struck me as odd. Frye, a bread-and-butter wrestler and swing-for-the-fences puncher, had never won a fight by leg lock, and Hall practically fell into the submission. I also knew both fighters were managed by the same guy.” (from page 215)

McCarthy said he told Bob Meyrowitz, the UFC owner at the time, that the fight was fake but Meyrowitz asked how he could think that.

McCarthy goes on to say rumors that Hall had thrown the fight circulated for months until Hall finally came out and admitted it and said Frye had offered to pay him. Hall said he came forward only after Frye failed to pay up. Frye denied the accusations.

John McCarthy’s autobiography, “Let’s Get It On!” (co-authored with Loretta Hunt) is published by Medallion Press and can be ordered online at Amazon.com.

11 thoughts on “Fixed fights in the UFC: A look inside the autobiography of “Big” John McCarthy – part 1”