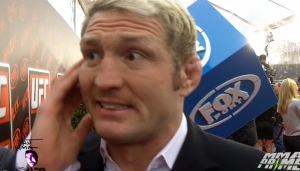 MMA fighters rubbed elbows with movie stars and television personalities at the UFC on FOX event in Anaheim over the weekend. FOX rolled out the red carpet treatment and MMA reporter extraordinaire Aaron Tru caught up with several of those attending as they were dressed to the nines and spoke their minds.

“Mayhem” Miller talks about your grandma, “The Count” Bisping talks about a pain in his rear end, Gina Carano embraces her awkwardness, Ron Perlman thinks Muhammed Ali was a UFC fighter, Overeem wants you to know he’s no joker, “Bones” Jones is unfazed by urine drinkers, Howie Mandel is scared, Gilbert Melendez thinks he’s the best, Michael Strahan is down with Matt Mitrione, Dominick Cruz gives himself advice every day, Affion Crockett has no shame in his game, Carlos Condit wants GSP and Brian Stann talks about his loss to Chael Sonnen.