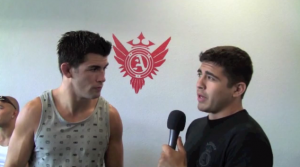 The Champ spoke to us about his upcoming title fight with Demetrious “Mighty Mouse” Johnson, which takes place this Saturday in the UFC on Versus 6 main event at the Verizon Center in Washington, D.C.

Cruz said although Johnson is quick, he does not believe “Mighty Mouse” has fought anyone as fast as he is, and he feels he has a size advantage as well. Cruz also said, not only does he believe he has a wrestling advantage over Johnson, but he believes he can “out-wrestle, out-strike and out-grapple” anyone in his division.

Cruz also talked about fighting on this card with his Team Lloyd Irvin friend and teammate, Mike “The Hulk” Easton. The Champ said he has a lot of confidence in Easton and believes he has a bright future in the UFC. Cruz also shared his thoughts on possibly moving up in weight class some day, but said there is still plenty of work for him to do at 135 for now.

Want more of “The Dominator”? Cruz was a guest Sunday night on Fist-ta-Cuff Radio; check it out on ProMMAnow.com’s Fist-ta-cuff Radio page.