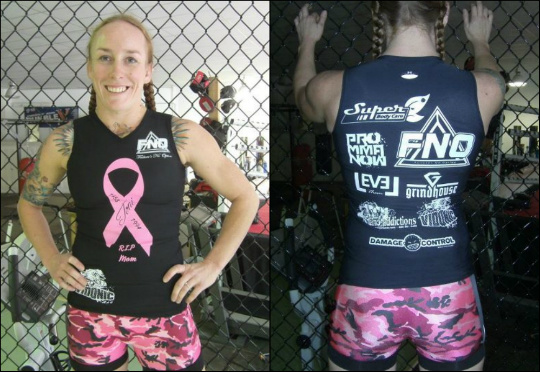 I feel like this girl is part of our family now here at ProMMAnow.com (www.prommanow.com). Her weekly blog, “The Vidonic Chronicles“, has garnered quite a bit of attention over the last year and it has been a real pleasure to read and edit her stories each week.

Our girl has her hands full this weekend though as she faces 23-year-old Texan, Chelsea “The Italian Princess” Colarelli (6-2), at “Blackeye Promotions 5: Breast Cancer Beatdown” in Fletcher, N.C., on Saturday. Not only is Colarelli a late replacement, but she is much younger and has a much better record than Patricia’s original opponent.

“Breast Cancer Beatdown”, which will air LIVE Saturday at 7 p.m. ET on Go Fight Live (www.gfl.tv), is stacked with eight women’s MMA bouts (and 11 men’s bouts), including Roxanne Modafferi vs. Barb Honchak in the main event.

We spoke to “Little” Patricia on Wednesday about the opponent change and how she feels she matches up with Colarelli. She also talked about the special meaning fighting on this “Breast Cancer Beatdown” card holds for her, she discussed her long term goals in the sport and much more.

PRO MMA NOW: Thanks for talking with us at ProMMAnow.com Patricia. We are just a couple days away from your fight against Chelsea Colarelli at Blackeye Promotions’ “Breast Cancer Beatdown”. What will these last few days be like for you mentally, and physically, how does your training change this close to a fight?

PATRICIA VIDONIC: Read my latest blog to find out…

PRO MMA NOW: I will do that, thank you. You had an opponent change leading up to this bout. What effect, if any, did that have on your training and preparation?

PATRICIA VIDONIC: Yes my original opponent suffered an injury, I am grateful that someone else stepped up to fill in for her. There is no adverse effect on myself, my training or my game plan.

PRO MMA NOW: You were originally supposed to fight Avery Vilche, who’s is 41-years-old and has a 2-6-1 record. However, your “new” opponent, Chelsea Colarelli is literally almost half Vilche’s age and her record is exactly the opposite at 6-2. Do you think Colarelli is a much tougher opponent than Vilche would have been and was there any hesitation on accepting the fight with Colarelli?

PATRICIA VIDONIC: In my opinion Avery has fought much tougher and more skilled opponents than Chelsea. As for hesitation, no way.

PRO MMA NOW: Now, you hold a title at 110-pounds, however, this fight is at 115-pounds. What do you feel is your optimum fight weight, in other words, what weight division do you feel most suited for?

PATRICIA VIDONIC: I felt amazing at 110 lbs. and I want to take on the #1 girl at 105 lbs. from Japan, Naho Sugiyama. My fight at 110 lbs., I weighed in at 108.4, so the extra couple of pounds will NOT be an issue. Then I would like to eventually (long term goal) be #1 in more than one weight class as well as being a #1 pound for pound fighter.

PRO MMA NOW: I love it. A lot of fighters, such as Jon Jones, talk about how much film they watch on their opponents. They study their fights over and over. Do you like to do that too, or what is your training philosophy when it comes to preparing for a specific opponent?

PATRICIA VIDONIC: Yes that is always helpful, I leave my prepping and game plan up to my head coach, he is the one that will see the things I don’t in the cage, so I listen to him and just go out there and do work!!

PRO MMA NOW: How familiar have you become with Chelsea Colarelli, did you watch a lot of her fights and how do you match up with her on the ground and on the feet?

PATRICIA VIDONIC: I know that she is a wrestler, no I haven’t seen much of her fighting. She doesn’t have a lot out there about herself. I’m sure we will put on a great show for the crowd. I am becoming more well rounded after each fight; win lose or draw, the only way to progress as a fighter is to learn and grow from each fight. I am confident in my abilities on the ground and on my feet. Let’s see where the fight goes, to see what type of skill I get to showcase.

PRO MMA NOW: This event will be raising money to help fight cancer and I saw your walk-out shirt with a pink ribbon on the front that says “Toni” on the ribbon and “Mom” underneath. For those who don’t know, this event holds a special meaning for you because your Mom actually passed away from cancer back in 1994. Do you think losing your Mom at such an early age played a role in you becoming a fighter and how do you think she would feel about you being a professional fighter?

PATRICIA VIDONIC: I am an only child, she tried to shelter me as much as she could knowing she was not having any more children. I have always been athletic and she was always extremely supportive of my decisions. I’m sure she would much rather me be a lawyer or something, but I know she is proud of me and loves me just the same. I feel her keeping me safe when I am in the cage and I also can feel how proud she is of me.

PRO MMA NOW: That is awesome. Now, those who have been following your blog, “The Vidonic Chronicles” on ProMMAnow.com, know you have been working hard training for this fight. Can you talk a little about the coaches and training partners who have helped you prepare for this fight?

PATRICIA VIDONIC: I have been working with Aaron Romero, who is one of my boxing coaches, he runs an amazing program for kids here in the community called Star and Stripes Boxing. He works with us adults Monday, Tuesday and Wednesday’s. Dave B. works with me on my Muay Thai and I roll with his jiu jitsu students during the noon class. Kiko is another one of my boxing coaches who works with me Thursday, Friday and Saturday nights. Will and Cubby are ground coaches for both Gi and No-gi nights. Sometimes we have guest instructors come in to broaden our fighting horizons. My head coach, Jason, works with me everyday, he coordinates times with the other coaches to put together a schedule that best suits what I am working toward for each fight. As for my training partners, wow, there is a lot of them here, but I do want to give a special thanks to those who have challenged me the most or by coming in on their time to work with me. Thank you.

PRO MMA NOW: There are several great fights on this card and some big names in women’s MMA on this card. Do you plan to stick around and watch some of the other fights, and if so, which fights other than your own are you looking forward to watching?

PATRICIA VIDONIC: I’m not sure where exactly I am on the line up; however, if I am able to see some of the fights I want to. The main event is one I want to see!

PRO MMA NOW: Thanks so much for talking with us “Little” Patricia and we wish you the best of luck on Saturday. Do you have any final words for the fans and are there any sponsors or anyone else you would like to thank?

PATRICIA VIDONIC: Oh yes, thank you Jack for this interview and allowing me to share my experiences leading up to each fight. I want to thank everyone at The Grinders Grindhouse here in Billings for working with me. My head coach, manager and hubby, Jason, for taking care of everything so I can focus on training and fighting. My rehydration coach and son Mark for being a great kid! All of my family friends and fans for your continued support. And of course my sponsors ~ Octane Addictions ~ OA Graphics ~ Super Body Care ~ NutraBio.com ~ Damage Control Mouthguards ~ Failures No Option ~ Level Terrain Apparel ~ and Durty Gurlz Gear for my weigh-in outfit.