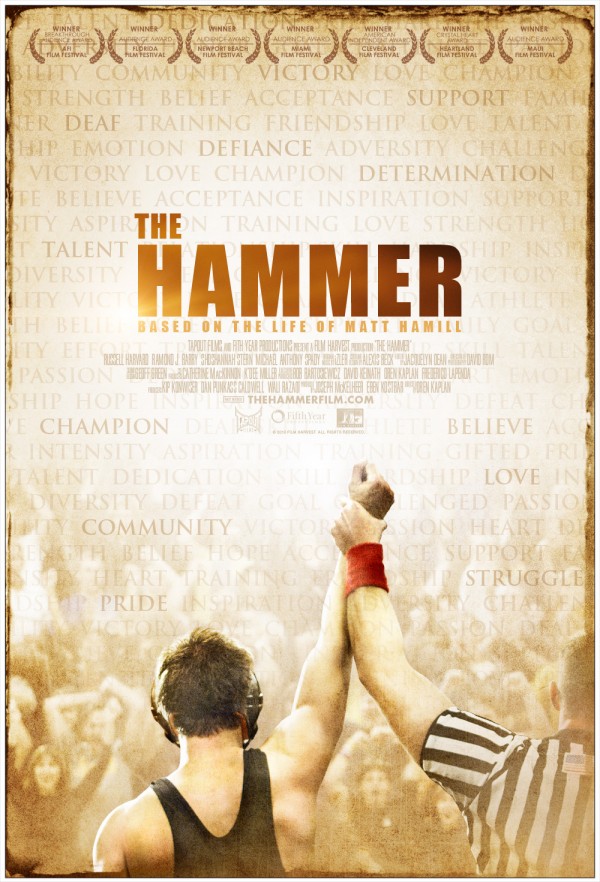 D&E Goes to the ‘Matt’ on The Hammer
Theatrical Distribution

Based on the life of UFC fighter Matt Hamill, The Hammer is a coming-of-age drama about the first deaf wrestler’s journey to win a National Collegiate Championship. Raised among those with the ability to hear, Matt finds himself no less an outsider amidst the Deaf community. But through sheer determination, he turns what could be a disability into an asset, and in the process, serves as an inspiration for both those who can hear and those who cannot.

“The Hammer is sure to enlighten every movie-goer, from sports fanatics to romantics to viewers looking for a feel-good movie,” said Doug Kluthe and Evan Saxon, Partners at D & E. “It is a story that is sure to open up the eyes and hearts of audience members with its against-all-odds spirit.”

“Following in the footsteps of movies such as Rudy and Rocky, we’re thrilled to finally share Matt’s remarkable underdog story with the world,” said Eben Kostbar and Joseph McKelheer, writers and producers of the film.

The film stars deaf actors Russell Harvard (There Will Be Blood) and Shoshannah Stern (Lie to Me, Weeds, Jericho) as Matt Hamill and Kristi Hamill, and Raymond J. Barry (Justified, Walk Hard) as Matt’s grandfather. Written and produced by Joseph McKelheer (Godspeed) and Eben Kostbar, The Hammerwas the recipient of The AFI Film Festival’s Breakthrough Audience Award, the Cleveland Film Festival’s American Independent Award and the Heartland Film Festival’s Crystal Heart Award. It has swept its festival run, receiving awards at 8 of 8 festivals, including the Audience Awards at Newport Beach, Florida, Miami, and Maui Film Festivals. The film’s score was composed by iZLER (Shameless, Revenge) and has been nominated for the Discovery of the Year Award at the World Soundtrack Awards in Ghent.

The director of the film is Oren Kaplan, who has been working for Disney as a web and TV series director since 2008. Oren’s recent projects include an online prequel to the Disney movie Prom, an Xbox 360 commercial campaign with Selena Gomez, and an original animated show for Disney.com about a paper family living in Los Angeles. His online work has amassed tens of millions of views across the web and is regularly featured on MTV, Comedy Central, ABC Family, and others. The Hammer is Oren Kaplan’s feature directorial debut.

More information on the film is available at www.TheHammerFilm.com

3 thoughts on “The Hammer: Feature film based on life of deaf UFC fighter Matt Hamill”