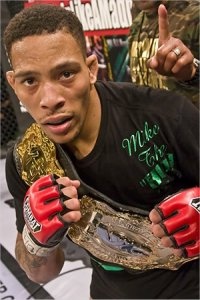 There are very few times where we really get to go behind the scenes and check out a fighter’s camp.

I mean we get the UFC all access shows but what about the “little guys” the guys who are in the process of making a name for themselves. Quite honestly that’s who most of the aspiring MMA fighters and fans need to see. They need to see the process from the ground up.

It’s cool to see, GSP and Anderson Silva now, but what did they look like and what were they doing back in the beginning, when they made their debuts.

Well fortunately, Lloyd Irvin is giving us that chance. Lloyd Irvin was my first BJJ Coach, my main training partner from 2000 to 2002 when I was training for the 2004 Olympics and he is the coach of Dominic Cruz, Brandon Vera, Mike Easton and many other fighters.

He has a stable of thoroughbreds in his facility and in all of his affiliate schools around the country. He has aided in the construction and production of the careers of many World Champions and National Champions in grappling and has coached several people to numerous titles.

Now, in the same fashion in which he as given to his students and the to the grappling community, he is giving to the Mixed Martial Arts community.

I have been working with Mike Easton for the past couple of years. I was privileged enough to be called upon by Master Lloyd to aid him in the preparation for the UWC Title Fight where we had to prepare him for five 5 minute rounds and I have been called upon again to coach him for his UFC debut.

I have no problem saying that I DO NOT NORMALLY show any of my behind the scenes work and quite honestly, neither does Lloyd, but Lloyd convinced me that if we want to grow this sport we must do it from the grassroots level. He said, “Let the UFC do what they do. They do that great. We have to focus on the grassroots MMA movement. There are many people out there like Mike Easton. Let’s give them his story. They can relate to that. Some people look at GSP and say, ahhhh, I’ll never be able to do that, but there are many people out there just a degree or two away from Mike and they will ‘wanna be like Mike.'”

So with that I agreed to allow him to show what I do behind the scenes as well.

To all those who are ProMMANow.com fans and readers. Please enjoy exclusive access to THE MIKE EASTON SHOW!!!

Enjoy and we’ll see you tomorrow!