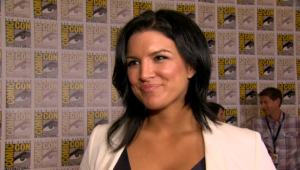 Female mixed martial arts star turned movie star, Gina Carano, was at Comic-Con this past week promoting her upcoming movie “Haywire” (see trailer), directed by Steven Soderbergh and due for release in Jan. 2012.

Carano discussed the experience of making the transition from MMA to acting and how she felt when she got the call from Soderbergh to do the movie right after losing her first MMA fight to Cris “Cyborg” Santos.

Carano also describes one of the much talked about fight scenes from the movie, how it was traveling the world to for filming and much more.