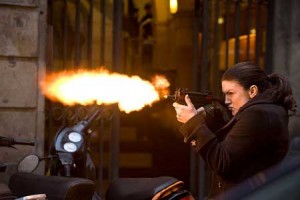 A couple of years ago Gina Carano was known as the “face of women’s MMA”. Then she ran into a 145-pound Brazilian by the name of Cristiane “Cyborg” Santos who not only gave Carano her first defeat but gave her a five minute beating that caused Carano to hide her face from the MMA world for well over a year.

During that time Carano was also working on a Steven Soderbergh-directed film called “Haywire” in which she plays lead character Mallory Kane, “a black-ops super soldier seeking payback after she is betrayed and set up during a mission”.

Soderbergh has directed such films as Oceans Eleven, Oceans Twelve, Oceans Thirteen, Traffic, Erin Brokovich and many more well known movies and television shows. Carano, who had only worked on one other movie prior to this, is supported by a cast of stars such as Michael Douglas, Ewan McGregor, Antonio Banderas, Channing Tatum and Bill Paxton.

For Carano to make such a drastic leap from MMA star to movie star in one film is mind-blowing really. Will the mainstream world fall in love with her the same way the MMA world did? Time will tell. At least in the movies her fights are scripted. Haywire is due for release in January 2012.

Carano has not fought since Aug. 2009 when she lost to Santos. She was originally scheduled to make her return to Strikeforce in June of this year but was pulled from the card when it was announced she did not pass her pre-fight medicals. It was later revealed she was in fact medically cleared, but the actual reason for her removal from the card was never clarified, and a date for her return to action is not known at this time.