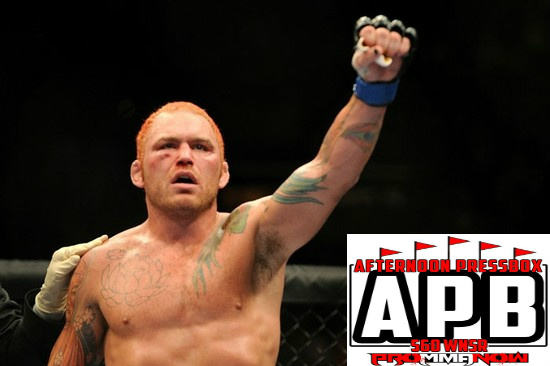 During Wednesday’s Afternoon Press Box, Darren and the boys were joined by UFC middleweight Chris “The Crippler” Leben who will be taking on Pride legend Wanderlei “The Axe Murderer” Silva this Saturday, July 2,, in the UFC 132 co-main event.

Leben shared his thoughts on how he feels he matches up with Wanderlei and what fighting someone of his renown means to him. He also explained what he learned from his loss to Brian Stann, how he has evolved as a fighter and much more.

In addition to talking with Leben, the guys analyze how he matches up with Wanderlei, they discuss the Tito Ortiz vs. Ryan Bader fight and the UFC 132 main event between Dominick Cruz vs. Urijah Faber.

The guys also look back at last weekend’s heavyweight brawl between Pat Barry and Cheick Kongo and Matt Mitrione‘s knockout of Christian Morecraft. Nate Marquardt‘s much-publicized release from the UFC was also discussed.

Afternoon Press Box (follow on Twitter @Nashville_MMA) features an MMA hour which airs LIVE each Wednesday afternoon from 2 p.m. – 3 p.m. CT on Nashville Sports Radio on 560 WNSR AM. It is one of the very few mixed martial arts shows you can listen to on traditional terrestrial radio.