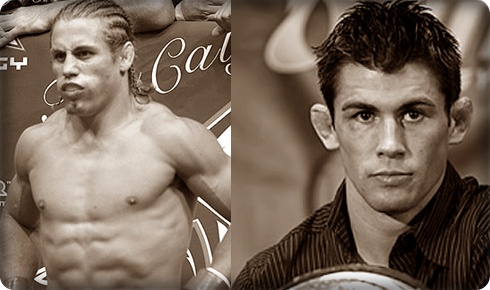 The main event at UFC 132 should be a good one with Urijah Faber taking on Dominick Cruz for the second time. These two fought a few years ago with Faber  defending his WEC featherweight title by defeating Cruz via choke early in the first round. Now the tables have turned with Cruz being the champion and Faber looking to anoint himself as the new king of the hill in the bantamweight division.

Urijah Faber comes into this fight with an overall record of (25-4) with 13 wins via submission and 7 wins via TKO/KO. Faber has won has last two fights with the last victory being a unanimous decision win over Eddie Wineland at UFC 128 in March. Faber has all the attributes you want in a well rounded fighter. He has solid wrestling, very good grappling, and good standup and could quite possibly be the best scrambler in MMA. By scrambler I mean someone that is able to quickly transition wherever the fight goes. Faber’s cardio is elite.

Dominick Cruz comes into this fight with an overall record of (17-1) with 7 wins via TKO/KO and 1 submission to his credit. Cruz was last seen in action defeating Scott Jorgensen via unanimous decision. Cruz has won his last eight fights dating back to the loss to Faber. Cruz is a good wrestler with unorthodox movements as he never really plants his feet to strike while throwing strikes from very odd angles. His cardio is elite.

This is a very interesting fight with a lot of questions because Faber won the first fight so quickly and because it was like 4 years ago. The pertinent questions now are can Faber have success while standing with Cruz? Can Faber stop Cruz from taking him down? How will Cruz react to Faber scrambling and taking his back or gaining an advantageous position?

I think Faber is going to have a lot of difficulty hitting Cruz while on the feet. However, Faber is pretty tough to hit as well but I would give the edge to Cruz simply because of the volume of strikes he throws whereas Faber is a little more efficient in his strikes. Cruz was able to take Faber down in the first fight and should be able to do it in this fight. I’m not sure Faber can take Cruz down as he had trouble with Eddie Wineland in his last matchup before breaking him down later in the fight. Faber does have the benefit of having the help of close teammate Joseph Benavediz who has fought Cruz twice before.

Cruz should keep this fight on the feet the entire fight. He shouldn’t take Faber down unless he has to because of Faber’s grappling prowess and ability to scramble. If he stays on the feet he could certanly outpoint Faber.

Faber needs to strike enough to set up his takedown attempts and/or create those scramble opportunities I spoke about earlier. It’s possible that he could gain top position or possibly take Cruz’s back and then look for submissions. Otherwise, I think he’ll have a hard time scoring enough on the feet to get the nod from the judges. I think Cruz will be able to stay out of those situations for the most part and he’ll win this fight via decision.