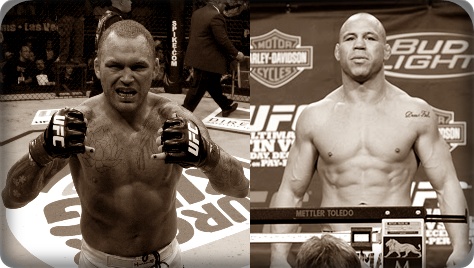 One of the most anticipated fights on the UFC 132 card is the middleweight fight between Wanderlei Silva and Chris Leben. Both fighters are very aggressive fan friendly fighters that put it on the line every time in the cage. Many are expecting this fight to be a rock’em sock’em standup war, but I don’t think that’s going to be the case come Saturday night. I do think the fight will have it’s moments though.

Chris Leben comes into this fight with an overall record of (25-7) with 13 wins via TKO/KO and 6 wins via submission. Leben was last in action taking on Brian Stann and got knocked out in the very first round at UFC 125. However, Leben was on a 3 fight winning streak prior to that fight. Leben has an aggressive style with heavy hands and and iron jaw. He’s also well versed in submissions.

Wanderlei Silva comes into this fight with an overall record of (33-10-1) with 23 wins via TKO/KO. He hasn’t fought since winning a unanimous decision in his middleweight debut over Michael Bisping at UFC 110 in February 2010, so he has been out of action close to sixteen months. Silva is a fan favorite always coming forward with an aggressive style while throwing huge looping punches with big power. Silva has been knocked out with one punch or kick 3 three times in the last 4 years, so that’ll be a concern against a guy like Leben.

In a recent interview Chris Leben mentioned that Silva has changed his style up a bit in his last couple of fights and I would agree with that completely. Silva still has his moments of wild aggressive striking, but he seems to reserve those moments to swarm on his opponents in the last 10-20 seconds of each round while exhibiting patience the other 4 and a half minutes. I think Silva realizes that he can’t take the punishment that he used to take so he has decided to take the smart approach to fighting and use more of the tools in his arsenal. He may get caught up in the moment with someone like Leben, but I suppose we’ll see on Saturday night.

I expect Wanderlei to fight a smart fight on Saturday night. I think he’ll use leg kicks quite a bit and he’s actually developed a jab that’s actually a straight punch(almost all of his punches have a loop in them). I even expect Silva to take Leben down at times just to keep him off balance. Leben is difficult to finish but Wanderlei Silva could be the best finisher in the history of MMA when he senses that he has his opponents in trouble. The one concern on Wandy’s behalf is the length of time he has been away from the cage. Will that affect his already questionable cardio? Can he take a big punch from Leben?

Leben simply needs to do what he does best and that’s turn this fight into a brawl. I think Wandy has more offensive tools and a slight speed advantage, but all it takes is one big punch from Leben and he could put Silva to sleep. If Leben is able to keep this fight on the feet for the duration, he’ll have ample opportunities to land that big punch especially near the end of a round when Silva starts to swarm.

I’m going to pick Silva to win a decision, but wouldn’t be surprised to see Leben land that one big punch to put Silva away.